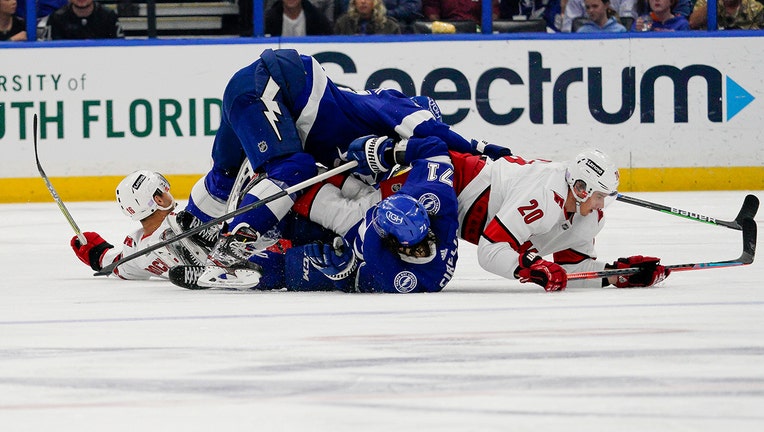 TAMPA, FL - NOVEMBER 09: a pile up during the NHL Hockey match between the Tampa Bay Lightning and Carolina Hurricanes on November 9th, 2021 at Amalie Arena in Tampa, FL. (Photo by Andrew Bershaw/Icon Sportswire via Getty Images)

TAMPA, Fla. - Martin Necas scored from the left circle 3:26 into overtime and the Carolina Hurricanes won their 10th game of the season, 2-1 over the Tampa Bay Lightning on Tuesday night.

Carolina also got a goal from Teuvo Teravainen.

The Hurricanes (10-1-0) set a team record for the fewest games to reach 10 wins. Carolina had its season-opening, nine-game winning streak end Saturday in a 5-2 loss at Florida.

"We knew we needed a bounce-back game," Carolina defenseman Brady Skjei said. "It was just a great team effort all around. You get the two points against a very good team, the reigning Cup champions is huge."

Steven Stamkos scored for the Lightning, who are 4-0-2 in the past six games.

Skjei appeared to score the winner 1:39 into overtime, but the goal was overturned after a video review showed the Hurricanes were offside on the play.

"I think that was one of the key takeaways for me. You fight back, you feel like you win it and you don’t, you didn’t and have to do it again," Hurricanes coach Rod Brind’Amour said. "It says a lot about the group. They literally shook it off, better than I did."

"They were like ’OK, play a little bit more," Brind’Amour added. "So, it was a real positive game for us."

Teravainen tied it at 1-all at 9:56 of the third on the Hurricanes’ fifth power play. Vincent Trocheck set up the goal with a pass through the low slot.

The goal came after Stamkos was called for interference on the goalkeeper.

"I think everybody saw what happened," Tampa Bay coach Jon Cooper said. "He got pushed (by a Carolina defender). But kill it (the power play) off."

Mathieu Joseph skated in from the right-wing and found Stamkos in the low left circle, where the Lightning captain made it 1-0 with 11 minutes left in the second.

Vasilevskiy lost a skate blade making a kick save during a Carolina 5-on-3 power play four minutes into second and played on his knees for around a minute before being able to freeze the puck. He got a piece of Andrei Svechnikov’s shot from in-close early in the third.

Stamkos hit the post and Andersen made a sprawling glove save on Ondrej Palat in the first two minutes of the second.

Carolina outshot the Lightning 12-3 during a scoreless first period. Both teams had two power plays.

Tampa Bay D Mikhail Sergachev served the final game of a two-game suspension for an illegal hit to the head on Toronto’s Mitch Marner last Thursday.

Lightning: D Erik Cernak left in the first period with an upper-body injury. Cooper said Cernak is likely out week to week.