A baby monitor recorded the scary ordeal of a tree crashing into a Louisiana home, sending debris onto a sleeping 5-month-old baby. Credit - Courtney Buchholtz

LOS ANGELES - Owlet has stopped selling its Smart Sock, the company’s flagship product that wraps around a baby’s foot to monitor their heart rate and oxygen levels, after it received a warning letter from the U.S. Food and Drug Administration.

The Los Angeles-based company said the FDA "did not identify any safety concerns about the Smart Sock," but rather the agency asserted that the technology should be "classified as a medical device in the U.S. because of the heart rate and oxygen notifications."

The agency states in the letter that Owlet has sold the product without "marketing approval, clearance, or authorization from the FDA."

Owlet said it plans to submit a device application to the FDA soon as a result of the letter. The Owlet Smart Sock is "currently unavailable," according to its product page.

"We plan to offer a new sleep monitoring solution, which we believe will be available soon. We also plan to continue to support our current customers. There has not been any change to your product’s functionality or a request from the FDA to exchange or return your product at this time," the company said in a statement on its website. 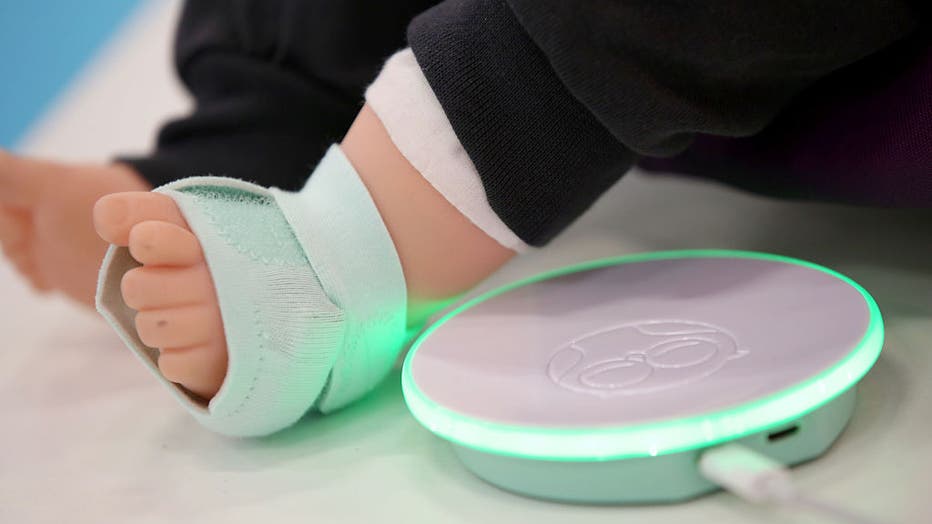 FILE - A measuring device called Owlet Smart Sock which checks blood pressure, heart rhythm, and blood oxygen levels is attached to the foot of a baby doll at the Child & Youth exposition in Cologne, Germany, on Sept. 14, 2017. (Photo by Oliver B

More than one million of Owlet’s Smart Sock baby monitors have been sold, the company said. It added that no other countries or regions outside the U.S. will be affected.

Owlet, which says its mission is to empower parents "with the right information at the right time," first launched in 2013. It debuted the third generation of its baby-monitoring sock earlier this year, which sells for around $359, according to CNET.

One version fits infants and up to 18 months. The Smart Sock Plus can range in ages up to 5. The sock, which fits on the left or right foot, tracks a child’s heart rate, oxygen level and sleep trends and notifies parents if those levels fall outside preset zones.