Broward County Sheriff’s Sgt. Raymond Beltran described to the jury how Parkland shooter Nikolas Cruz attacked him and grabbed his Taser while in the Broward County Jail. The incident was captured on surveillance video.

The sister of student Joaquin Oliver glared at Cruz as she left the witness stand, while the families of student Alaina Petty and teacher Scott Beigel appeared to look away from him. Cruz sat at the defense table, mostly looking down but sometimes glancing at the video screen in front of him.

The jury also saw three chilling cellphone videos Cruz made in the days before his attack, discussing his plan to kill at least 20 people at Stoneman Douglas, his former school. They also saw text messages he made on the day of the attack, Valentine’s Day, to a former girlfriend expressing his unrequited love for her and to a friend, asking whether he could find a date for him that night. He did, but the text telling Cruz arrived just as his Uber was dropping him off at the school.

Patricia Oliver, Joaquin's mother, told the seven-man, five-woman jury and their 10 alternates that he was a gentle and kind boy, 17 and a senior with plans to attend college so he could work in sports management. He was already planning his wardrobe for his graduation three months away, down to what belt he would wear. She said there was an outpouring of love after his death.

"I never knew he had so many friends," she said, stifling her tears. "Our life has been shattered and changed forever."

His older sister, Andrea Ghersi, spoke of how when she has children she will have to explain to them why they don't have an uncle. Hatred filled her face as she glared at Cruz while walking back to her seat.

Victoria Gonzalez brought at least one juror to tears as she talked about losing her "soulmate." She talked about their love of movies, how he would sing along to the car radio and how he met her at the bus stop the morning of his death with Valentine's flowers and a stuffed yellow elephant. 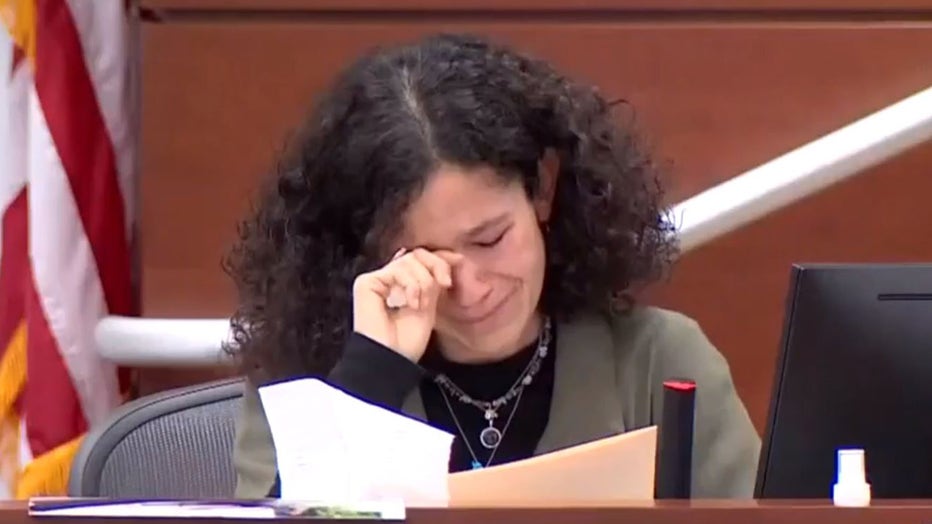 Victoria Gonzalez, the girlfriend of Joaquin Oliver, who died in the Parkland shooting, gives tearful testimony about her "soulmate" during Nikolas Cruz's penalty trial Monday, Aug. 1, 2022 in Fort Lauderdale, Florida.

RELATED: Parkland teachers weep on the stand while recalling students killed in school

Petty's mother, Kelly, said she loved helping in the kitchen and her short time in the school's Junior Reserve Officer Training Corps. A member of the Church of Jesus Christ of Latter-Day Saints, she had helped in hurricane recovery the summer before her death.

Her sister, Meghan, said that while Alaina was the baby of her family's four children, in some ways she was the oldest, displaying a maturity beyond her years. They would snuggle together to watch television.

"She was an angel on Earth and she should still be here," she said. She cried as she said she could no longer remember her sister's voice.

Beigel's mother, Linda Schulman, and his stepfather, Michael Schulman, talked of his love for teaching, his students and baseball. His mother said he got the job teaching at Stoneman Douglas because he agreed to coach the cross-country team — even though he did not know how.

Speaking in a strong voice, Linda Schulman said he told his runners that if they would teach him about cross-country, he would teach them about life. When his runners just missed qualifying for the state meet, they asked him what they could do next time. She drew laughs when he said he told them, "Run faster." That remains the team's motto.

Michael Schulman said that when he told Scott he wanted to marry his mother, he said his only response was, "All I ask is that you make my mother happy."

Cruz, 23, pleaded guilty to 17 counts of first-degree murder in October, meaning the jury will decide only whether he is sentenced to death or life without parole.

Four years after the deadly mass shooting that left 14 students and three staff members dead, it will be up to a jury to decide if confessed Parkland shooter Nikolas Cruz will get life in prison or the death penalty.

The jurors saw Monday the three cellphone videos he made starting six days before his attack.

In the first two, he is not seen. Only his voice is heard.

"Today is the day. Today it all begins. The day of my massacre shall begin," he said in the first. In the second, he says, "When you see me on the news, you’ll all know who I am. You’re all going to die. ... Can’t wait."

In the final video, taken three days before the shooting, Cruz, wearing a ball cap, talks into the camera says he is "going to be the next school shooter of 2018." He ends the video by making gun noises. 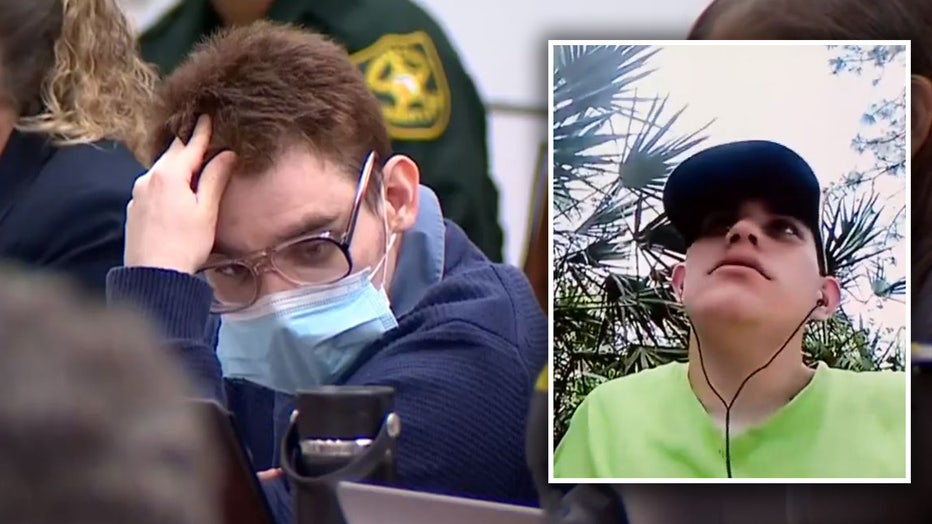 Confessed Parkland school shooter Nikolas Cruz holds his head during his penalty trial Monday, Aug. 1, 2022 in Fort Lauderdale, Florida. Insert shows a still of one of the cellphone videos Cruz recorded in the days leading up to the massacre, where h

In text messages, starting about 90 minutes before the attack, Cruz tells his ex-girlfriend he loves her, then asks, "Do you want me to go away?"

She replied, "You're scaring me and I want you to leave me alone." She told him she had a boyfriend. He replied he didn't care. As he arrived at the school, he texted her once more to tell her he loved her.

Meanwhile, a friend he had spent several hours texting with about possibly getting him a date that night, also responded that he had found a girl who would hang out with him. That text also arrived as Cruz was arriving at the school.

When jurors get the case, they will vote 17 times, once for each of the victims, on whether to recommend capital punishment.

For each death sentence, the jury must be unanimous or the sentence for that victim is life. The jurors are told that to vote for death, the prosecution’s aggravating circumstances for that victim must, in their judgment, "outweigh" the defense’s mitigators. A juror can also vote for life out of mercy for Cruz.

During jury selection, the panelists said under oath that they are capable of voting for either sentence.