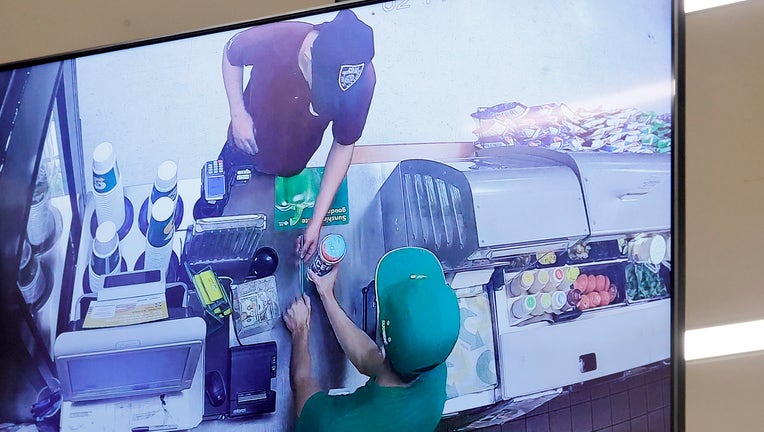 Surveillance video shown in court of Nikolas Cruz in Subway of the defendant shortly after the shooting. Nikolas Cruz is in court for the penalty phase of his trial at the Broward County Courthouse in Fort Lauderdale on Thursday, July 21, 2022. Cruz

Cruz then walked to a nearby McDonald's, where, by coincidence, he unsuccessfully sought a ride from the brother of a girl he had seriously wounded. The boy did not not know who Cruz was.

Thursday's abbreviated court session focused on Cruz's attempted escape after the Feb. 14, 2018, shooting and his arrest, about an hour after he fled the campus. The mostly low-key testimony and evidence stood in contrast with the previous three emotional days, which covered the seven minutes Cruz stalked a three-story classroom building firing his AR-15 semi-automatic rifle into crowded classrooms and hallways.

After the shooting, Cruz fled the building, dressed in a burgundy shirt from the Stoneman Douglas Junior Reserve Officer Training Corps — he had been a member when he attended the school — and a New York City Police Department cap.

The former Stoneman Douglas student blended in with students who were evacuating campus and went to a nearby Walmart, where security video shows that 25 minutes after he stopped shooting he turned into the Subway sandwich shop inside the entrance.

Store manager Carlos Rugeles testified that Cruz ordered a cherry and blue raspberry Icee. The video shows that when Cruz got his drink and change, he tossed the coins into the tip jar, stuck a straw into the lid and walked out.

Eight minutes later, Cruz entered a nearby McDonald's, still drinking his Icee, store video shows. He climbed into a booth with then-Stoneman Douglas freshman John Wilford, who did not know him. 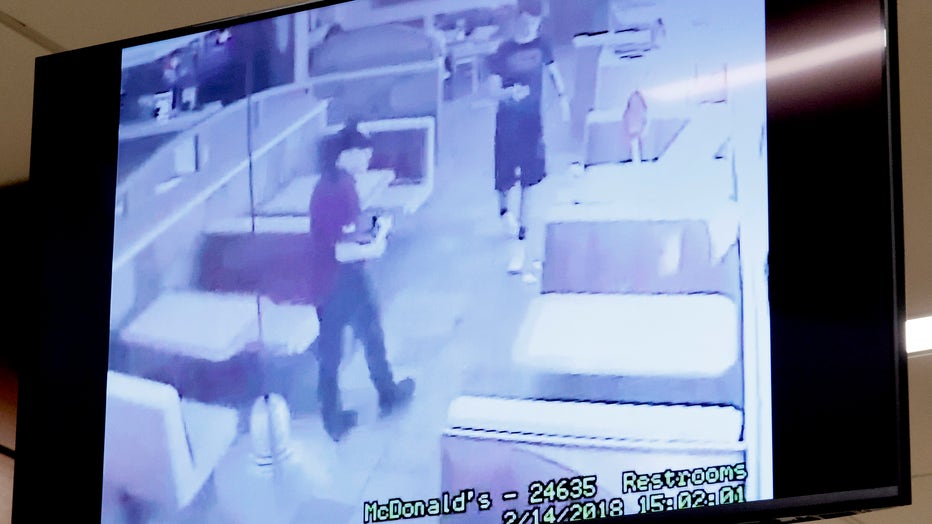 Surveillance video shown in court of Nikolas Cruz in Mcdonald's encountering student John Wilford shortly after the shooting during the penalty phase of Nikolas Cruz's trial at the Broward County Courthouse on July 21, 2022 in Fort Lauderdale, Florid

Wilford testified that he didn't know exactly what had happened at the school, but after evacuating he had been trying to call his older sister Maddy — he didn't know she had been seriously wounded by this stranger. When he couldn't reach her, he called his mom, who said she would pick him up.

He then tried to make small talk with Cruz.

"I told him, ‘This is so chaotic, it’s crazy with all these helicopters and squad cars. What do you think this could be?'" Wilford recalled. "He didn't say much. He had his head down."

A minute later, Wilford went to meet his mother in the parking lot. Cruz followed and asked for a ride, but Wilford said no.

"He was pretty insistent on it. I wasn't really thinking much of it. I just wanted to get home and my sister wasn't answering her phone," Wilford said.

Four years after the deadly mass shooting that left 14 students and three staff members dead, the penalty trial for the shooter began Monday with opening statements.

Cruz walked away. He was arrested about a half-hour later by Michael Leonard, an officer with the neighboring Coconut Creek Police Department. Leonard testified he was driving through neighborhoods looking for anyone matching the shooter's description.

The officer was 3 miles (5 kilometers) from the school and about to drive back toward it when he spotted Cruz walking on a residential street. He said he stopped and Cruz looked at him. He pulled his gun and ordered Cruz to the ground. Cruz complied.

Cruz, 23, pleaded guilty in October to 17 counts of first-degree murder. The jury must only decide if he should be sentenced to death or life without parole for the nation’s deadliest mass shooting to go before a jury.

When jurors eventually get the case, probably in October or November, they will vote 17 times, once for each of the victims, on whether to recommend capital punishment.