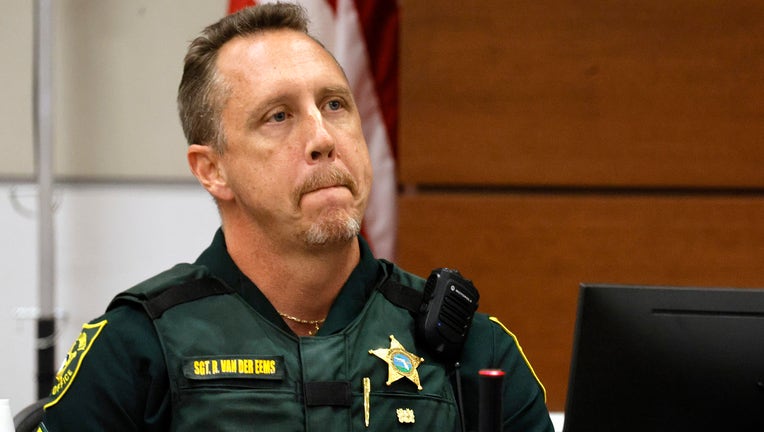 Broward Sheriff's Office Sgt. Richard Van Der Eems describes the scene he encountered at the school after the mass shooting during the penalty phase of Nikolas Cruz's trial at the Broward County Courthouse on July 22, 2022 in Fort Lauderdale, Florida

"I observed a child dead on the ground on the left and there was smoke and dust in the air," said Broward Sgt. Richard Van Der Eems in the flat, professional tone the officers all used. Worried that the shooter might still be in the building, he said he pointed his gun to provide cover as other officers led students and teachers out of the building and carried out the wounded. They didn't know that Cruz had fled the building about three minutes earlier.

Van Der Eems and other officers entered the building immediately after arriving, about 10 minutes after the shooting began. Then-Broward Deputy Scot Peterson, the school's security officer, is charged with child neglect for staying outside while Cruz continued shooting. He has pleaded not guilty and is scheduled for trial early next year. Other deputies were disciplined for failing to go into the building when they arrived.

The police in Uvalde, Texas, are being criticized for waiting more than an hour before confronting a gunman who killed 19 students and two teachers at an elementary school in May.

Coral Springs Capt. Nicholas Mazzei said that as he ran to the building, he found the body of assistant football coach Aaron Feis, who was shot trying to stop Cruz.

"I checked him for vitals, realized he was deceased," Mazzei said. He said he then went inside and found athletic director Christopher Hixon, who later died of wounds he received while confronting Cruz. He said they talked, but prosecutors did not ask what was said.

Coral Springs Detective David Alfin said he climbed the stairs to the third-floor landing, where he found Cruz's rifle and vest next to the body of 14-year-old Jaime Guttenberg.

"I checked her vital signs for breath and pulse and I found none," he said, adding that he checked two or three times. "We held there for a moment and ... heard a voice from the hallway."

Four years after the deadly mass shooting that left 14 students and three staff members dead, the penalty trial for the shooter began Monday with opening statements.

He, Van Der Eems and others went to the third floor, where they found other bodies and a severely wounded Anthony Borges, who was lying in the middle of the hallway, raising his hand and trying to yell to get their attention.

The officers were shown photos of the victims they saw, but those weren't immediately shared with the jury.

Cruz, 23, pleaded guilty in October to 17 counts of first-degree murder. The jury must only decide if he should be sentenced to death or life without parole for the nation’s deadliest mass shooting to go before a jury.

When jurors eventually get the case, probably in October or November, they will vote 17 times, once for each of the victims, on whether to recommend capital punishment.