Pelosi calls for Pence to remove Trump with 25th Amendment

House Speaker Nancy Pelosi has joined Senate Democratic leader Chuck Schumer and a growing chorus of lawmakers calling on President Donald Trump’s Cabinet to remove him from office following Wednesday’s violent assault on the Capitol by the president’s supporters.

WASHINGTON (AP) - House Speaker Nancy Pelosi says she has instructed the House Rules Committee to be prepared to move forward on a motion to impeach President Donald Trump and to introduce 25th Amendment legislation if Trump does not "immediately resign" in the wake of a deadly pro-Trump riot in the U.S. Capitol.

Pelosi’s statement came after an hours-long conversation she said she had with the House Democratic Caucus after a mob of the president’s supporters violently stormed the U.S. Capitol on Wednesday, leaving death and destruction behind.

"It is the hope of Members that the President will immediately resign. But if he does not, I have instructed the Rules Committee to be prepared to move forward with Congressman Jamie Raskin’s 25th Amendment legislation and a motion for impeachment," Pelosi said in a statement.

Democrats moved forward on laying impeachment plans Friday for Trump, even as he's headed out of the White House, and Pelosi said she had spoken to the chairman of the Joint Chiefs of Staff about preventing an "unhinged" Trump from ordering a nuclear strike in his final days.

The White House issued a statement Friday, calling a potential impeachment "politically motivated" and added that such a move would "only serve to further divide our great country."

Pelosi and the Democrats are considering swift impeachment — beginning Monday — after the deadly siege of the U.S. Capitol by a pro-Trump mob that shocked the nation and the world.

"We must take action," Pelosi declared on a private conference call with Democrats.

She said she had also spoken with Gen. Mark Milley "to discuss available precautions for preventing an unstable president from initiating military hostilities or accessing the launch codes" for nuclear war. She said Milley assured her longstanding safeguards are in place.

The president has sole authority to order the launch of a nuclear weapon, but a military commander could refuse the order if it were determined to be illegal. Trump has not publicly made such threats, but some lawmakers are sounding alarms that he could do great damage on military or other issues on his way out.

The attack on the Capitol left five dead, including a protester and a police officer. Trump is to leave office Jan. 20 when Democrat Joe Biden is sworn in, and he has said he will not attend the inauguration.

"This unhinged president could not be more dangerous," Pelosi said of the current situation.

If Trump were to be impeached by the House and convicted by the Senate, he might also be prevented from running again for the presidency in 2024 or ever holding public office again. He would be only the president twice impeached. A person granted anonymity to discuss the private call said Pelosi also discussed other ways Trump might be forced to resign.

Biden, meanwhile, said he is focused on his job as he prepares to take office. Asked about impeachment, he said, "That’s a decision for the Congress to make."

Biden says issue of Trump impeachment up to Congress

President-elect Joe Biden said the issue of a possible second impeachment of President Donald Trump is a decision left for Congress and declined to weigh in.

Conviction in the Republican Senate at this late date would seem unlikely, though in a sign of Trump's shattering of the party many Republicans were silent on the issue.

One Trump ally, Republican Minority Leader Rep. Kevin McCarthy of California, said "impeaching the President with just 12 days left in his term will only divide our country more. "

McCarthy said he has reached out to Biden and plans to speak with the Democratic president-elect about working together to "lower the temperature."

The final days of Trump’s presidency are spinning toward a chaotic end as he holes up at the White House, abandoned by many aides, leading Republicans and Cabinet members. He was tweeting again after his Twitter account was reinstated, reverting to an aggressive statement that his supporters must not be "disrespected" after he sent out a calmer Thursday video decrying the violence.

Calls are mounting for legal action following the Capitol attack, in which one protester was shot to death by Capitol police and Capitol police officer Brian Sicknick died. Three other people died from "medical emergencies" during the demonstration.

Strong criticism of Trump, who urged the protesters to march to the Capitol, continued unabated.

"Every day that he remains in office, he is a danger to the Republic," said Rep. Adam Schiff, D-Calif.

Schiff, who led Trump’s impeachment in 2019, said in a statement that Trump "lit the fuse which exploded on Wednesday at the Capitol." 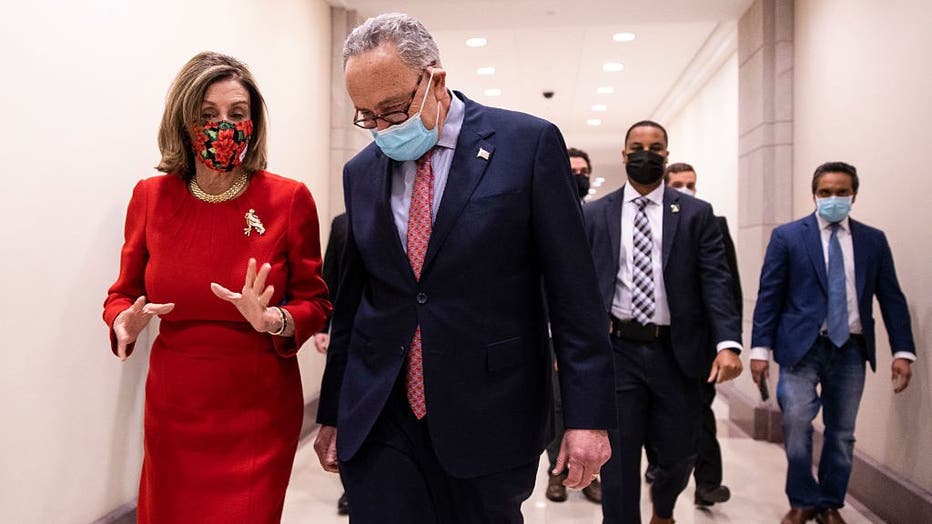 Articles of impeachment are expected to be introduced on Monday, with a House vote as soon as Wednesday, according to two people familiar with the planning and granted anonymity to discuss it.

A draft of the impeachment resolution charges Trump with abuse of power, saying he "willfully made statements that encouraged — and foreseeably resulted in — imminent lawless action at the Capitol."

On her call with colleagues, Pelosi grew emotional talking about Wednesday’s events. She told the lawmakers they had a choice to make on impeachment, according to a person on the call who was granted anonymity to discuss it.

Pelosi and Democratic Senate leader Chuck Schumer have called on Vice President Mike Pence and the Cabinet to invoke the 25th Amendment to force Trump from office. It’s a process for removing the president and installing the vice president to take over.

RELATED: What is the 25th Amendment? Here’s what you need to know

But action by Pence or the Cabinet now appears unlikely, especially after two top officials, Education Secretary Betsy DeVos and Transportation Secretary Elaine Chao suddenly resigned in the aftermath of the violence at the Capitol and would no longer be in the Cabinet to make such a case.

Trump had encouraged loyalists at a rally Wednesday at the White House to march on the Capitol where Congress was certifying the Electoral College tally of Biden's election.

Rep. James Clyburn, the No. 3 House Democrat, told CNN: "Everyone knows that this president is deranged." One leading Republican critic of Trump, Sen. Ben Sasse of Nebraska, said he will "definitely consider" impeachment.

Schumer said he and Pelosi tried to call Pence early Thursday to discuss the 25th Amendment option but were unable to connect with him.

Most Democrats, and many Republicans, put the blame squarely on Trump after swarms of protesters bearing Trump flags and clothing broke into the Capitol and caused destruction and evacuations.

The House impeached Trump in 2019, but the Republican-led Senate acquitted him in early 2020.

"Do they stand by these actions?" Pelosi asked. "Are they ready to say that for the next 13 days this dangerous man can do further harm to our country?"

Pence has not publicly addressed the possibility of invoking the 25th Amendment.