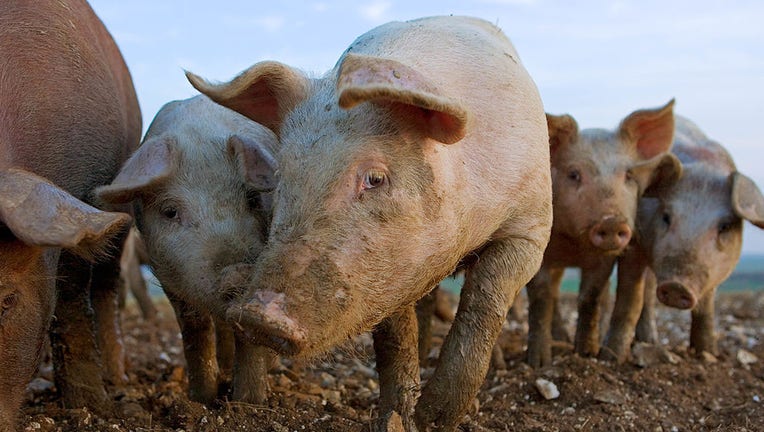 FILE IMAGE - Pigs at a farm in Lambourn, England, are seen in an undated file image. (Photo by Tim Graham/Getty Images)

Researchers at Yale University restored circulation and cellular function in the vital organs of pigs, such as the heart and brain, an hour after the animals died.

Scientists called the experiments "stunning," noting how the findings may help extend the health of human organs during surgery and expand the availability of donor organs. They also noted how future research requires a "rigorous ethical review" from bioethicists and others.

"All cells do not die immediately, there is a more protracted series of events," David Andrijevic, an associate research scientist in neuroscience at Yale School of Medicine and co-lead author of the study, said in a statement. "It is a process in which you can intervene, stop, and restore some cellular function."

The research, published in the Aug. 3 edition of the journal Nature, builds upon 2019 experiments by the same team in which they partially restored some basic functions to the brains of dead pigs hours after the animals died.

"If we were able to restore certain cellular functions in the dead brain, an organ known to be most susceptible to ischemia [inadequate blood supply], we hypothesized that something similar could also be achieved in other vital transplantable organs," said Yale’s Nenad Sestan, the Harvey and Kate Cushing Professor of Neuroscience and professor of comparative medicine, genetics, and psychiatry.

In a medical first, doctors transplanted a pig heart into a patient in a last-ditch effort to save his life and a Maryland hospital said that he's doing well three days after the highly experimental surgery. While it’s too soon to know if the operation really will work, it marks a step in the decades-long quest to one day use animal organs for life-saving transplants. Doctors at the University of Maryland Medical Center say the transplant showed that a heart from a genetically modified animal can function in the human body without immediate rejection.

In the new study, researchers connected pigs that had been dead for one hour to a system called OrganEx that pumped a blood substitute throughout the animals’ bodies. The experimental solution contained the animals’ blood and 13 compounds such as anticoagulants, which decrease the blood's ability to clot.

Six hours after the treatment, the team of scientists found that certain key cellular functions were active in many areas of the pigs’ bodies — including the heart, liver, and kidneys — and that some organ functions had been restored.

They found evidence of electrical activity in the heart, which retained the ability to contract, the team said.

"We were also able to restore circulation throughout the body, which amazed us," Sestan said in the statement.

The team explained that normally when a heart stops beating, organs begin to swell, collapsing blood vessels and blocking circulation. But in this study, circulation was restored and organs in the dead pigs that received the OrganEx treatment "appeared functional at the level of cells and tissue."

"Under the microscope, it was difficult to tell the difference between a healthy organ and one which had been treated with OrganEx technology after death," researcher and Yale neuroscientist Zvonimir Vrselja added.

Furthermore, the team was surprised to see "involuntary and spontaneous muscular movements" in the head and neck areas when they evaluated the treated, deceased animals, which remained anesthetized through the entire six-hour experiment.

Sestan said these movements indicated the preservation of some motor functions.

Implications for human longevity could be ‘profound’

The Yale team of scientists stressed that more studies are necessary to understand "the apparently restored motor functions in the animals." They added that rigorous ethical review from other scientists and bioethicists is required.

The latest study was approved by Yale’s Institutional Animal Care and Use Committee and guided by "an external advisory and ethics committee," the team said.

The authors also warned that the results do not show that the pigs have somehow been revived after death, noting the absence of electrical activity in the brain.

"We made cells do something they weren’t able to do" when the animals were dead, Vrselja told Nature. "We’re not saying it’s clinically relevant, but it’s moving in the right direction."

The OrganEx technology used in the study could eventually be used to extend the life of organs in human patients and expand the availability of donor organs for transplant, the authors said. It could also be able to help treat organs or tissue damaged by decreased blood flow and oxygen during heart attacks or strokes.

If the findings of cellular restoration can be replicated eventually in humans, the implications for human longevity could be as "profound" as the development of CPR and ventilators, Nita Farahany, a neuroethicist at Duke University in Durham, North Carolina, told Nature.

Farahany was not an author of the study, but called the findings "stunning" and said that while preliminary, the research suggests that some perceived limitations of the human body might be overcome in the future.

"There are numerous potential applications of this exciting new technology," Stephen Latham, director of the Yale Interdisciplinary Center for Bioethics, said in the statement. "However, we need to maintain careful oversight of all future studies, particularly any that include perfusion of the brain."