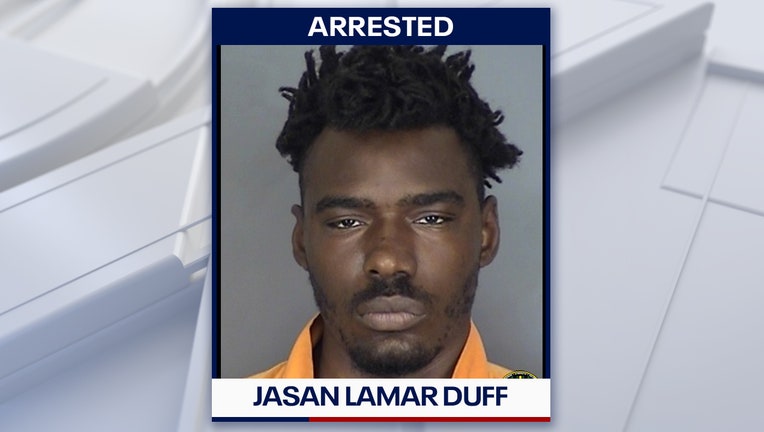 SEBRING, Fla. - A 21-year-old man drove from St. Pete to Highlands County expecting to meet a teenager and smoke marijuana before they had sex, deputies said. However, he ended up meeting with detectives instead.

Highlands County detectives arrested Jason Lamar Duff on charges of sending harmful material to a child and traveling to meet a minor for sex after using a computer to solicit a child.

They said Duff was communicating with a 14-year-old girl online and sent her three videos of himself.

"Let’s just say he was enjoying some personal time. He knew the girl he was chatting with was underage," according to a narrative by the sheriff’s office. "What he didn’t know was that at a certain point during the conversation, he had stopped chatting with the girl and started chatting with one of our detectives. This detective is definitely not a 14-year-old girl."

On Thursday, deputies said Duff headed east to Highlands County, promising to bring marijuana to smoke before they had sex.

"Instead, he got to meet a bunch of folks with badges," the agency wrote in a Facebook post. "So instead of going to his young victim’s house like he had hoped, Jason went to the Highlands County Jail."

Officials said Duff was also on felony probation for grand theft of a motor vehicle in Pinellas County.  Jail records from previous arrests in 2020 list Duff as a transient.