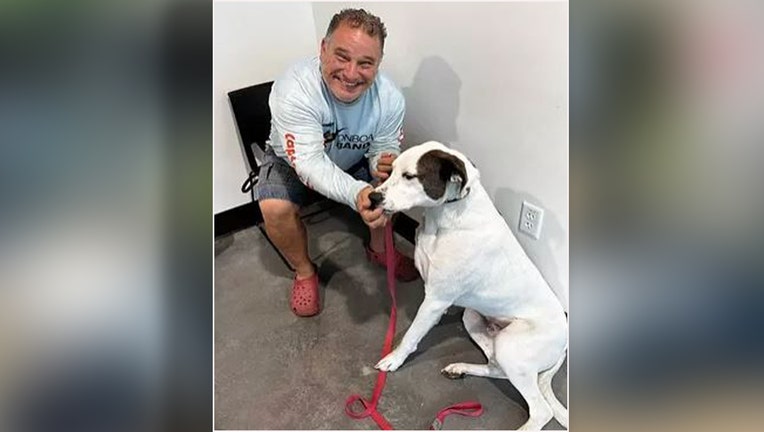 TAMPA, Fla. - A dog who was dropped off at a Tampa animal shelter by his family because he was deaf and they couldn’t take care of him has found a new home with a Tampa man who also suffers from hearing loss.

It was ‘puppy love’ at first sight when Davelis "D.C." Goutoufas recently walked into the Humane Society of Tampa Bay and laid eyes on a 14-month-old Labahoula dog named Champ.

"As I went into his cage, he was super friendly to me. I pet him and then as I was walking out, he was going forward to me and barked softly, like he was trying to communicate to me, ‘please pick me’, Goutoufas explained. "I turned around then walked back to his cage and pet him again. He was excited. Then I was walking out again he went forward again and barked softly."

Goutoufas said he had randomly decided to swing by the shelter just to see what dogs were there and was completely enamored by Champ. He had Labradors since college and when an employee told him Champ was deaf, he knew he found the perfect dog because Goutoufas also suffers from hearing loss.

After texting his daughter and sending her some videos of Champ, Goutoufas officially adopted him.

Since Goutoufas’ is Greek he wanted his dog to have a Greek name settled on Apollo.

He says Apollo knows plenty of commands in sign language. The dog knew some sign language before being adopted and learned a lot from Goutoufas, who is a former adjunct professor in American Sign Language and his daughter who studied ASL in college.

In photos and video, Apollo seems to be living his best life. Since his adoption, Apollo has been spending his days swimming, playing with friends, riding in golf carts and boating.

Goutoufas says his family has welcomed Apollo with open arms and love him.