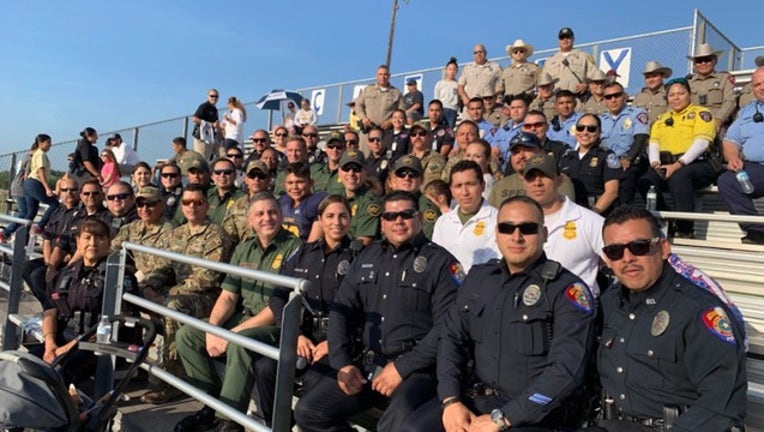 MISSION, Texas (FOX 35 ORLANDO) - A middle school football player who lost his father in the line of duty had dozens of officers cheering him on in his dad's place during his first game.

Three months prior, the Mission Police Department lost Cpl. Jose "Speedy" Espericueta after he was fatally shot while reportedly responding to a call about a woman who said her son shot at her car. When Espericueta tried to make contact with the man, the suspect shot him. The shooter was later gunned down by responding officers. Sadly, Espericueta died at the hospital.

According to Yahoo!, he was the first officer in Mission to lose his life in the line of duty in 40 years.

On Sept. 21, his 13-year-old son, Joaquin, was playing his first football game as captain for the Cathey Middle School team in McAllen. The police department kept a promise to Cpl. Espericueta's family and filled the stands to cheer the young boy on.

"Mission 👮🏻 officers vowed to take care of Cpl. Espericueta's family. They kept that promise as they showed up for Joaquin's 1st football 🏈 game," the City of Mission wrote on Twitter. "Speedy's son was named honorary capt. So many officers & city leaders were there to support! #ThisIsForSpeedy 💙."

Joaquin had about 50 officers rooting for him in the crowd to show him that he and his family are not alone.

Before the game, some of the officers joined Joaquin midfield for the starting-team coin flip. A helicopter flew over the field in his dad's honor.