An August report suggests the COVID-19 outbreak has profoundly impacted sleep and mental health for people around the world.

BOSTON - New research suggests that older adults who struggle to fall asleep and stay asleep may have an increased risk of developing dementia or dying early from any cause.

A study published this month in the Journal of Sleep Research analyzed data collected over eight years from the National Health and Aging Trends Study (NHATS), which is representative of Americans over the age of 65.

The research team examined data between 2011 and 2018 from respondents who reported difficulty falling asleep or routinely waking up at night "most nights" or "every night."

The risk for dementia was similar, with individuals who reported falling asleep facing a 49% heightened risk, according to the findings. Those who had difficulty staying asleep throughout the night had a 39% increased risk of developing dementia.

But those who reported regular difficulties with both falling asleep and staying asleep throughout the night had the highest risk of either dementia or dying early, at 56% and 80% respectively.

"Our study is novel in that it explores specific sleep difficulties and incident dementia," study author Rebecca Robbins, PhD, of the Division of Sleep and Circadian Disorders at the Brigham, said in a statement. "Each sleep difficulty has unique challenges and treatment recommendations, and difficulties are reported at varying intensities across the population of older adults, lending support for exploring each difficulty distinctly."

The team of sleep researchers from Brigham and Women’s Hospital and Harvard Medical School compared responses from 6,376 Medicare beneficiaries to the participants’ medical records. 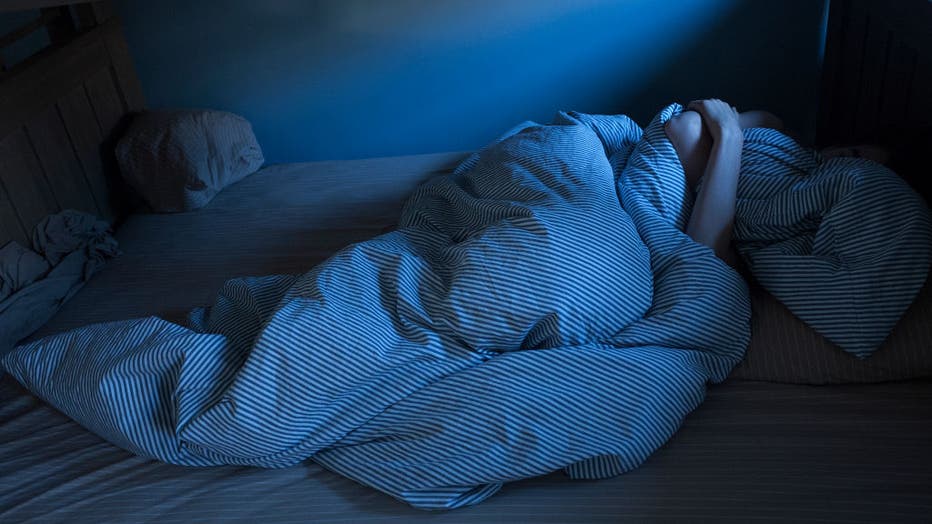 FILE - An individual is pictured lying in bed in a file image taken on Jan. 13, 2018, in Brooklyn, New York. (Photo by Andrew Lichtenstein/ Corbis via Getty Images)

Experts say regular sleep is vital to health but many do not get enough of it. An estimated 45% of the global population suffers from sleep problems, according to the World Sleep Society.

RELATED: Study: Middle-aged people who sleep less than than 7 hours nightly may have increased risk of dementia

In the U.S., data from surveys conducted by the Centers for Disease Control and Prevention and the Maternal and Child Health Bureau show that 34.1% of children, 74.6% of high school students, and 32.5% of adults fail to get a sufficient amount of sleep on a regular basis.

The American Academy of Sleep Medicine recently published a new position statement on the matter, declaring that sleep is a "biological necessity, and insufficient sleep and untreated sleep disorders are detrimental for health, well-being, and public safety."

"Healthy sleep is as important as proper nutrition and regular exercise for our health and well-being, and sleep is critical for performance and safety," AASM President Dr. Kannan Ramar said in a statement. "It is the position of the AASM that sleep is essential to health, and we are urging educators, health care professionals, government agencies, and employers to prioritize the promotion of healthy sleep."

The professional society also called for more research on sleep and circadian rhythms to further illuminate the importance of sleep for public health.