Fixing malfunction junction could be next road project

TAMPA, Fla. - It is known as Malfunction Junction, the downtown Tampa interchange where Interstate 4 meets Interstate 275. Transportation officials have been working for years on a fix for the dangerous and congested area and it could happen sooner than expected.

A local vote Wednesday means the daily brake lights and bottlenecks could finally break free, with a project ready for construction next year.

"The way it is now, those exit ramps back up and they’re very, very hazardous," said Hillsborough County Commissioner Harry Cohen.

The Florida Department of Transportation has plans to revamp malfunction junction by adding extra lanes to some ramps, widening others, and reducing merge points.

Wednesday, the project got one step closer to construction.  The Hillsborough County Transportation Planning Organization gave the green light to spend $2.5 million to buy six houses and a vacant lot needed by FDOT for work on the interchange to start.

"It was the remaining piece that was needed to be done in order to make the project essentially shovel-ready," explained Cohen, who is the commission's transportation planning organization chair. 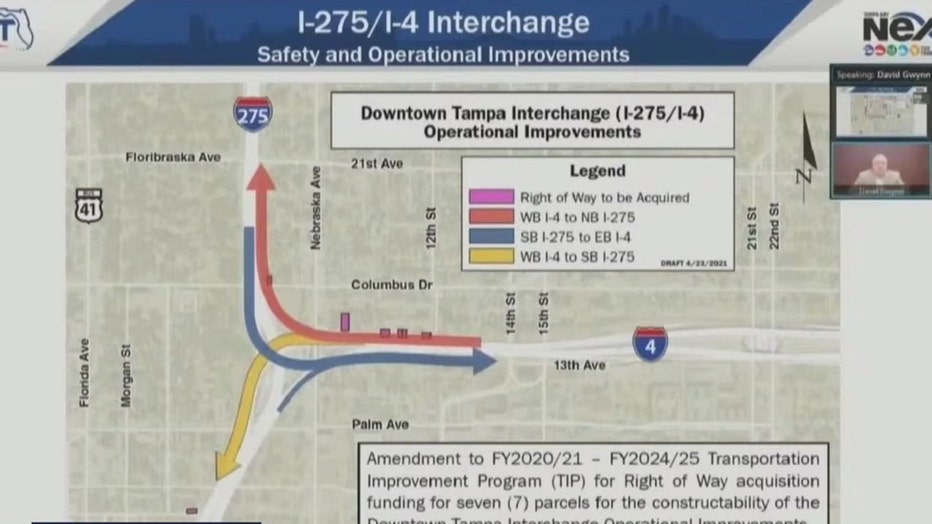 With that approval, FDOT can now focus on getting the remaining funding needed for the overhaul.

"The Legislature did provide an additional $2 billion to be used for infrastructure throughout the state," explained FDOT District 7 secretary David Gwynn.  "All the districts around the state are preparing their projects that they feel could be ready for construction to start next year or the year after, and this project is."

That means the problem-plagued interchange could see a fix way ahead of schedule.

Those changes will hopefully improve traffic flow, as well as safety. According to FDOT, there were more than 500 crashes along the stretch of two interstates in 2012 and the number doubled to about 1,000 in 2018.

"We project, based on what we saw today, that there will be a 20-35% reduction in crashes that occur on a daily basis on this set of expressway routes," Cohen said.

The project also includes a nearly $10 million investment in trail upgrades for bikes and pedestrians, along with enhanced lighting and landscaping.