MANAGUA, Nicaragua - Residents of southern Florida are being advised to keep an eye on Hurricane Eta, which on Tuesday evening was making landfall along the coast of Nicaragua.

The National Hurricane Center projected Eta will re-emerge in the Caribbean Sea before heading north toward Cuba and potentially affecting Florida over the weekend as a tropical storm.

“While it is too soon to determine the exact timing, magnitude, and location of possible impacts from wind and rainfall, interests in Cuba, southern Florida and the Florida Keys should monitor the progress of Eta through the week,” the National Hurricane Center said in a 5 p.m. advisory Tuesday.

The track of the storm put South Florida in the middle of the forecast cone on Sunday afternoon.

The storm dropped from a Category 4 to Category 2 as it interacted with land Tuesday.

The National Hurricane Center said Eta will begin to weaken Tuesday night to a tropical storm by early Wednesday, and become a tropical depression Wednesday night.

The heart of the powerful storm moved ashore in Nicaragua with devastating winds and rains that had already destroyed rooftops and caused rivers to overflow. The U.S. National Hurricane Center said hurricane had sustained winds of 110 mph (175 kph), down from an overnight peak of 150 mph (240 kph). 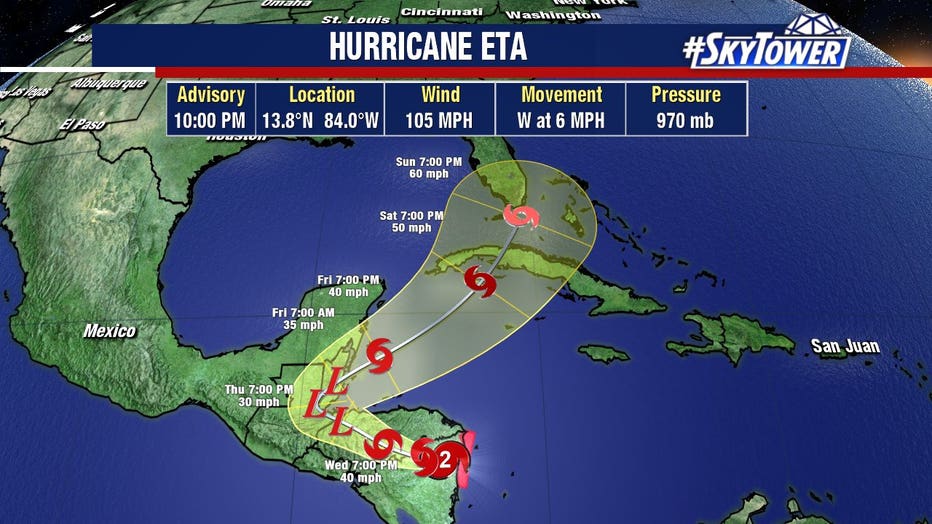 Even before it made landfall, Honduras reported the first death after a mudslide trapped a 12-year-old girl in San Pedro Sula. Tuesday afternoon, the Category 4 hurricane was still on the coast, about 25 miles (40 kilometers) south-southwest of coastal Puerto Cabezas or Bilwi.

Authorities in Nicaragua and Honduras moved people from outer islands and low-lying areas to shelters. Residents scrambled to shore up their homes, but few structures along Nicaragua’s remote Caribbean coast were built to withstand such force.

The government said more than 3,000 families were taken to shelters from the most at risk areas. 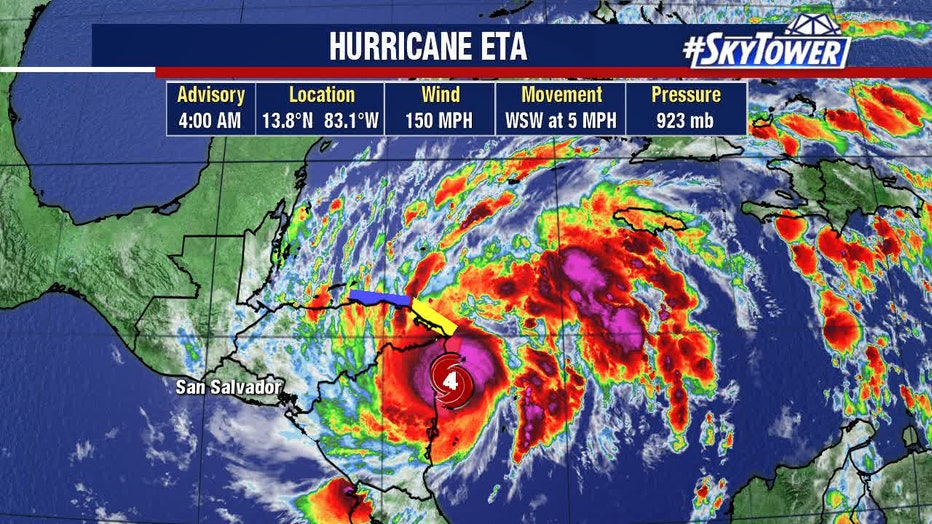 At a shelter in Bilwi, farmer Pedro Down waited late Monday for Eta’s arrival. “When it comes it can rip off all the (roof) and destroy the house, so you have to look for a safer place,” he said, cradling a baby in his arms. “So I came here to save our lives.”

On television Monday, Nicaragua Vice President and first lady Rosario Murillo prayed for God to protect the country. She said Nicaragua would apply lessons learned from previous storms. “How many hurricanes have come and we have moved on, thanks to God,” she said.

Forecasters said central and northern Nicaragua into much of Honduras could get 15 to 25 inches (380 to 635 millimeters) of rain, with 35 inches (890 millimeters) in isolated areas. Heavy rains also were likely in eastern Guatemala, southern Belize and Jamaica.

Storm surge up to 15 feet (4.5 meters) above normal tides was possible for the coast of Nicaragua, forecasters said.

The quantities of rain expected comparisons to 1998’s Hurricane Mitch, one of the most deadly Atlantic hurricanes in history. An archival report from the National Hurricane Center said Mitch led to the deaths of more than 9,000 people. 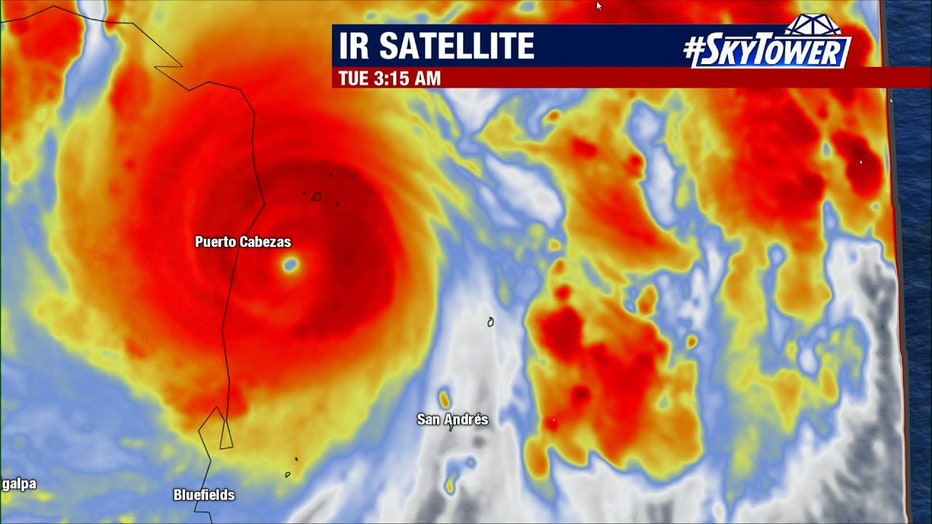 Eta tripled in strength in about 24 hours, rapidly intensifying from a 40 mph (65 kph) storm Sunday morning to a 120 mph (190 kph) hurricane around midday Monday, and continuing to gain power throughout the day.

It is the eighth Atlantic storm this season to hit the meteorologists’ definition for rapid intensification — a gain of 35 mph (56 kph) in wind speed in just 24 hours. It’s also the fifth to reach major hurricane status. Over the past couple of decades, meteorologists have been increasingly worried about storms that just blow up in strength.

Eta is the 28th named Atlantic storm this season, tying the 2005 record for named storms. It’s the first time the Greek letter Eta has been used as a storm name because after the 2005 season ended, meteorologists went back and determined a storm that should have been named wasn’t.

Hurricane season still has a month to go, ending Nov. 30. In 2005, Zeta formed toward the end of December.