BRADENTON BEACH, Fla. - Wildlife rescuers in Bradenton Beach came to the aid of a raccoon who managed to get himself very, very stuck -- in a car engine block.

It started last Thursday at the Bridge Street Hotel, when someone called Wildlife Inc. about a raccoon on the third floor of the building. A volunteer spotted the fully grown raccoon and noticed it had a limp, but was otherwise healthy.

When the volunteer and hotel staff tried to rescue the animal, the raccoon managed to squeeze through a narrow gap railing on the stairs and landed on the ground floor.

The possibly injured raccoon then darted under parked cars and scrambled up into the engine of a Nissan Sentra.

Staff members found the owners of the car, who were worried about the raccoon's safety.

After several hours of trying to coax the raccoon out, Wildlife Inc. called in a veterinarian for help, who determined that the animal was stuck and would not be able to get out of the engine block without human help. 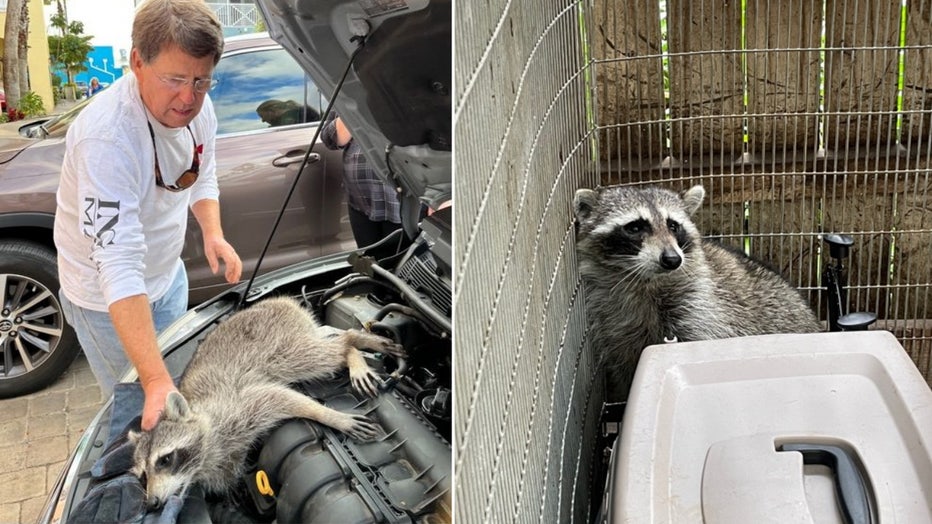 The veterinarian gave the raccoon a sedative, which allowed rescuers to safely pull the animal out of its tightly wedged spot.

The raccoon was then brought to Wildlife Inc for a thorough examination, where he received a clean bill of health. After a few days of recovery, rescuers released the animal back into the wild.