A rare Double Eagle coin, a sole-surviving British Guiana stamp and a sheet of U.S. stamps with a printing error are going up for auction on June 8, 2021. Video courtesy of Sotheby's.

NEW YORK - "The holy grail of coins" and two of the world’s most valuable items in stamp-collecting are going up for auction next week in New York and could sell for a combined $37 million.

The three items, an "elusive" 1933 Double Eagle Coin, the sole-surviving British Guiana One-Cent Magenta and a sheet of U.S. postage stamps with a printing error called the Inverted Jenny Plate Block, are all poised to set new world auction records in their respective categories, according to Sotheby’s New York, which is holding the sale on June 8.

The treasured items are from the personal collection of fashion designer Stuart Weitzman. 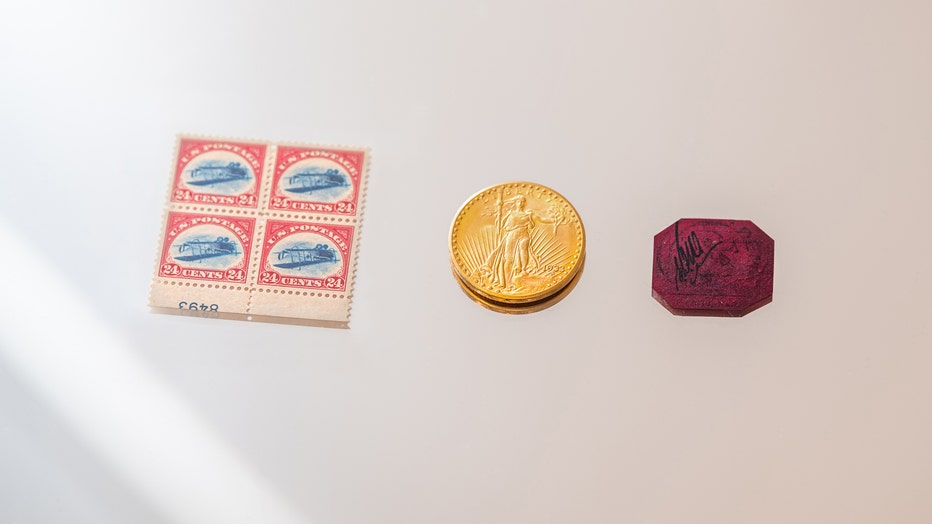 The 1933 Double Eagle coin, which is a $20 gold coin, last set a world record when Weitzman purchased the coin in 2002. It is America’s last gold coin struck for circulation, featuring Liberty on one side and an American eagle in flight on the other. However, President Franklin Roosevelt in 1933 took the country off the gold standard and almost all 1933 Double Eagles were ordered destroyed, Sotheby’s said.

But a handful later appeared on the market, prompting a Secret Service investigation in 1944 that determined "all 1933 Double Eagles in collectors’ hands had been stolen from the United States Mint, and therefore illegal to own," the organization said.

The whereabouts of the coin going up for sale on June 8 remained a mystery until 1996 when it was seized by the Secret Service in a sting operation at the Waldorf Astoria in New York, Sotheby’s said. After a years-long legal battle, the U.S. government permitted this single 1933 Double Eagle to be privately owned. 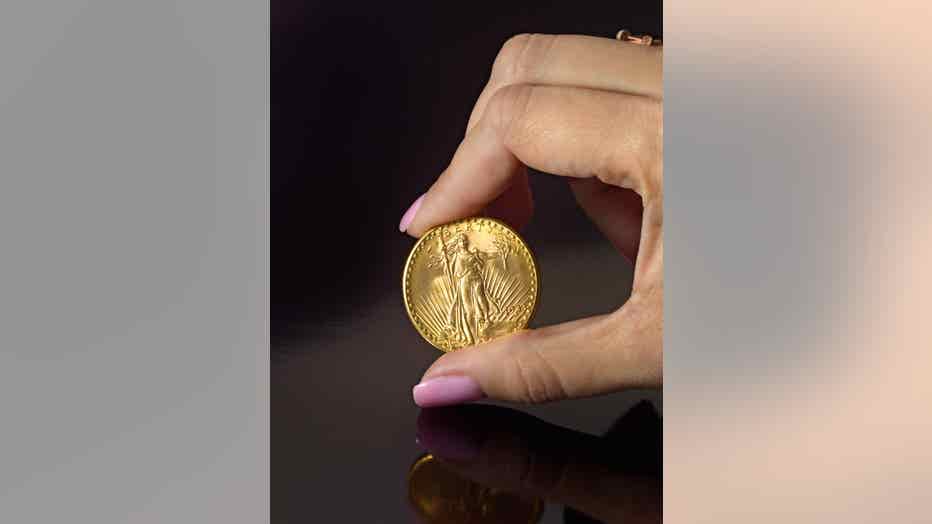 The 1933 Double Eagle coin (PHOTO BY SQUAREMOOSE via SOTHEBY’S)

To this day, Stuart Weitzman’s 1933 Double Eagle is "the only example the United States Government has ever authorized, or ever intends to authorize, for private ownership," Sotheby’s said.

The sole-surviving example of the 1856 British Guiana One-Cent Magenta has been heralded as "the pinnacle of stamp collecting" for more than a century, Sotheby’s said.

It has set a new record price for a single stamp each of the four times it has sold at auction. It last sold to Weitzman in 2014 at Sotheby’s for $9.48 million, nearly one billion times its original face value, the organization said.

The stamp hails from British Guiana, known today as the independent nation of Guyana. Its history begins in 1852 when the colony's stamps were all imported from England, Sotheby's said. But a clerical error in 1855 led to a shortage of the stamps, prompting the British Guiana postmaster to turn to the printers of the local Royal Gazette newspaper to commission a contingency supply of stamps for the following year: the one-cent black on magenta-colored paper, a four-cent magenta, and a four-cent blue. 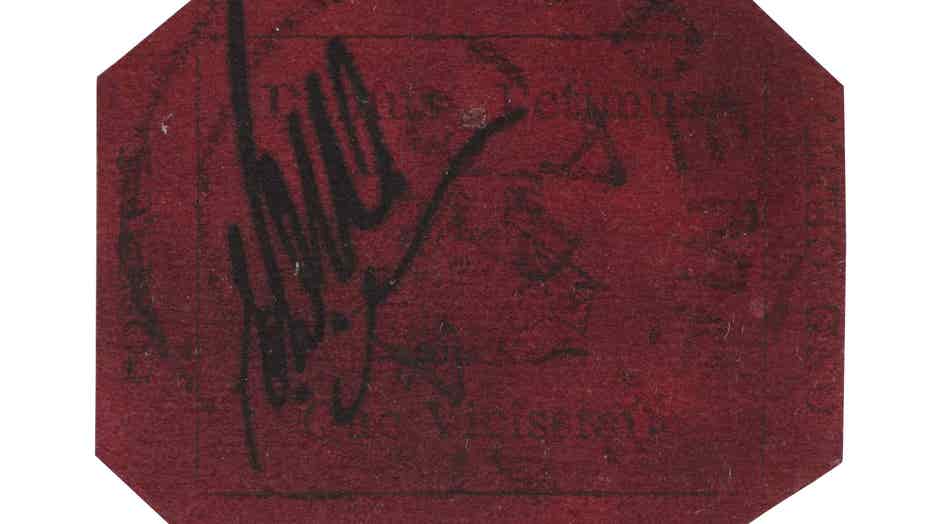 The sole-surviving example of the one-cent magenta was first rediscovered in 1873 by a 12-year-old schoolboy living with his family in British Guiana. It then passed through several notable stamp collections — before ultimately making its way to Weitzman.

Sotheby’s said anticipates that both the British Guiana and Double Eagle coin will sell for an estimated $10 million to $15 million each — and will set new world auction records in their respective categories.

Called the 1918 24-Cent Inverted Jenny Plate Block, the very first U.S. airmail issue is the "most famous and valuable item" in the United States stamp collecting — thanks to a printing error, Sotheby’s said.

The United States Postal Service released a special bi-colored stamp in May 1918 featuring a blue Curtiss JN-4 "Jenny" biplane – the country’s first airmail carrier – surrounded by a carmine red frame. A printing error resulted in a single sheet of 100 stamps with the biplanes appearing upside-down, the organization said.

The 1918 24-Cent Inverted Jenny Plate Block sold for $24, the face value of the 100 stamps, to cashier and stamp collector William T. Robey.

"Robey recognized the rarity of the flawed sheet and rebuffed the USPS demands that he return the stamps after they learned of their mistake," Sotheby’s said on its website. "Instead he sold the sheet just a few days later marking the beginning of the wild and sinuous journey of the 100 Inverted Jennies, which encompasses some of the greatest stories in American stamp history." 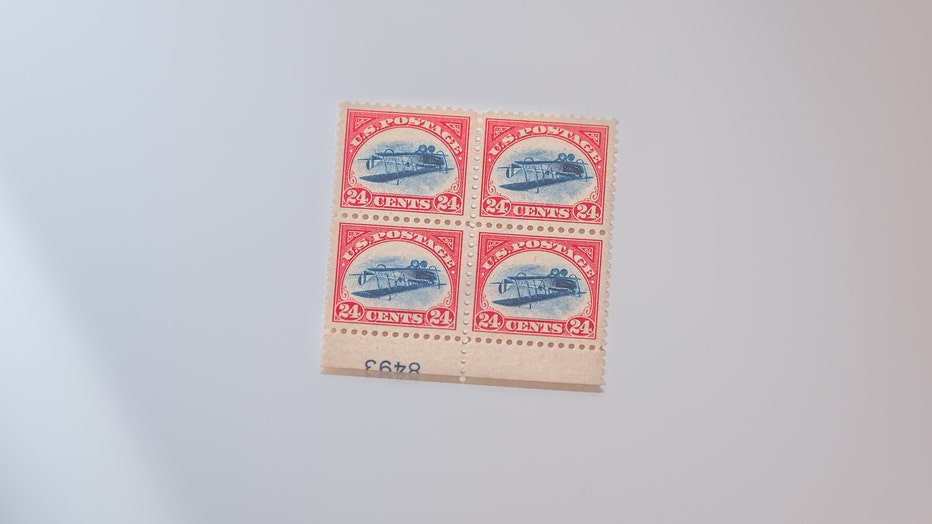 It last appeared on the market 16 years ago when it sold at auction for $2.97 million. It was later purchased privately by Weitzman in 2014.

Sotheby’s said it expects the Inverted Jenny to eclipse its own record for an American philatelic item and sell for an estimated $5 million to $7 million.