NEW PORT RICHEY, Fla. - A deadly, mosquito-borne virus has been detected in the Tampa Bay area. Health officials are warning about the uptick and urging people to protect themselves.

Eastern Equine Encephalitis is a very rare, very deadly illness. One bite from an infected mosquito can get you sick.

The Pasco County Department of Health issued a warning this week after multiple sentinel chickens tested positive for the EEE virus.

"We have nine locations throughout the county where we have sentinel chicken flocks established, and we are taking blood samples on a weekly basis and sending those off to the Department of Health laboratory," explained Adriane Rogers, executive director of the Pasco County Mosquito Control District.

The flocks do not get sick from the virus and serve as an early warning system that the mosquito-borne disease is here and could be passed onto humans.

The virus cycles between mosquitoes and birds in freshwater swampy areas. Officials say the recent lack of rain means those animals have more contact, and it is causing high levels of infection. 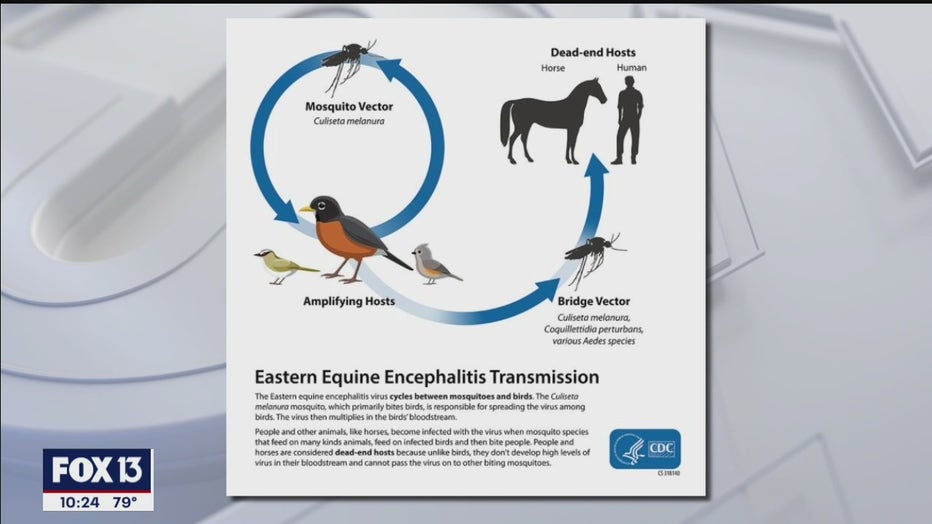 "It’s like the perfect storm of mosquito and virus transmission," said Rogers.

So far this year, the Department of Health says the virus has been detected in three horses and 63 sentinel chickens across 11 counties, including Pasco, Polk, Citrus, Manatee, and Sarasota.

"To have an increased level of Eastern Equine Encephalitis virus occurring right now, people should be taking this seriously, and take appropriate measures to protect themselves and their families and loved ones from mosquitoes," Rogers said. 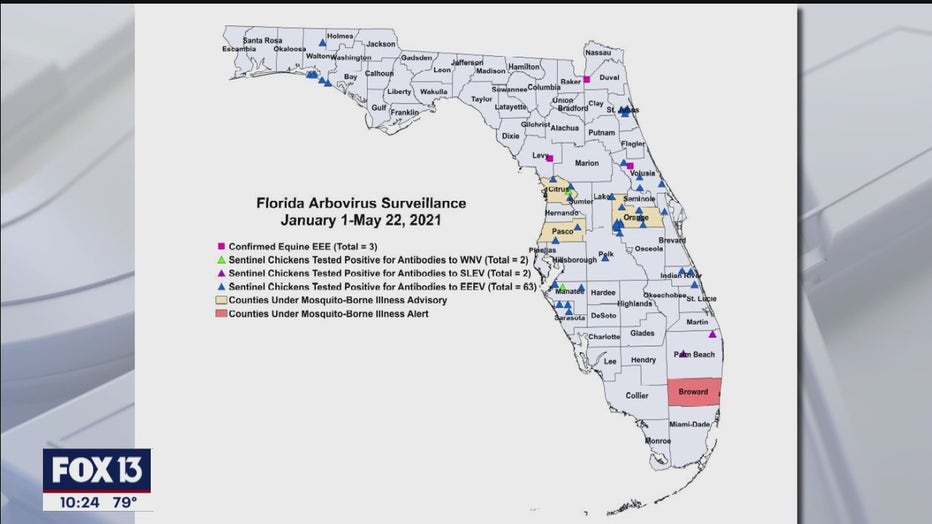 According to the CDC, only about 11 human cases of EEE are reported nationwide each year. In 2019, there was a spike in cases with 38 recorded.

Most infected people have no symptoms, but they can range from a fever and headache to brain swelling and paralysis. About 30% of people do not survive, and those who do often have lifelong neurological problems.

Officials say this is no reason to panic. There are precautions you can take to avoid being bitten and stop mosquitos from multiplying.  Including wearing long sleeves and pants, using insect repellant with DEET, and draining any standing water at your house.