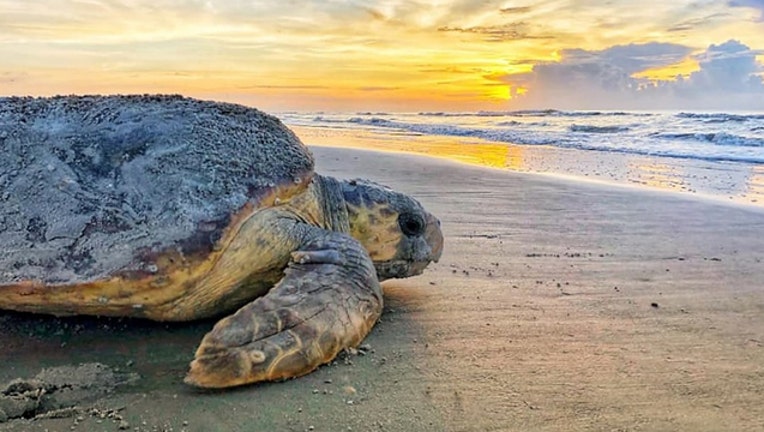 SAVANNAH, Ga. (AP) - Rare sea turtles are smashing nesting records this summer on beaches in the Southeast, with scientists crediting the egg-laying boom to conservation measures that began more than 30 years ago.

Giant loggerhead sea turtles weighing up to 300 pounds crawl ashore to dig nests in the sand every summer along the southern Atlantic coast. While nesting typically occurs from May through August, record nest counts set in 2016 have already fallen in Georgia, South Carolina and North Carolina.

So far this year, researchers and volunteers in those three states have cataloged more than 12,200 nests left by loggerheads, a threatened species protected under the Endangered Species Act. That's already far ahead of the 11,321 nests in the previous highest count three years ago.

"My laboratory is almost floor-to-ceiling in samples right now," said University of Georgia professor Joe Nairn, who studies adult female turtles using DNA extracted from eggshell samples taken from each loggerhead nest found in the three states. "It's pretty obvious to us that this is a big year."

Loggerheads crawling from the surf of the Atlantic Ocean lay roughly 100 pingpong-ball sized eggs per nest. During the nesting season, volunteers from North Carolina to Florida comb the shoreline each day around sunrise to catalog new nests and cover them with protective screens to keep out wild hogs and other predators until the eggs hatch.

The nest counts serve as a key indicator of the overall population's health. Female loggerheads tend to lay eggs only every three to four years, so the numbers often fluctuate. Still, scientists have seen an encouraging leap in the past 15 years.

Loggerhead nesting along Georgia's 100-mile coast hit its low point in 2004 with fewer than 400 nests.

So far this year, more than 3,500 loggerhead nests have been recorded on Georgia's beaches, surpassing the state's 2016 record of 3,289. Mark Dodd, the state biologist who heads Georgia's sea turtle recovery program, said he expects the final count to reach 4,000 nests by the end of August.

Dodd says the rebound can likely be traced to two key conservation measures taken up decades ago. States have stepped up monitoring and protection of sea turtle nests since loggerheads were listed as a threatened species in 1978. And shrimp boats trawling in U.S. waters since 1987 have been required to equip their nets with escape hatches for sea turtles.

"They've been able to survive to maturity and reproduce and come back to lay eggs," said Michelle Pate, who leads the sea turtle program for the South Carolina Department of Natural Resources. "It's been a long haul, but I think we're finally seeing it pay off."

South Carolina this year has counted more than 7,100 nests on its beaches - an increase of more than 600 nests compared to the previous record from 2016. And North Carolina's nest count has passed 1,640, edging its record from three years ago.

Results of DNA testing on sea turtle eggs conducted at the University of Georgia back up the idea that more female loggerheads are reaching maturity and starting to nest. Since 2010, survey teams in Georgia and the Carolinas have collected one egg from each nest they find and sent the shell to Nairn's lab.

Each eggshell is used to establish a DNA fingerprint for the adult turtle that laid it. After building a DNA database for loggerheads for roughly a decade, Nairn said his research team each year still finds 25 to 30 percent of the nesting females are turtles they haven't seen before. He said that suggests the adult female population is growing.

The busiest U.S. state for sea turtle nesting by far is Florida, which had a record 122,707 loggerhead nests in 2016. The numbers are so large that Florida doesn't keep a running count during the nesting season. Final counts are typically completed in the fall.

"Based on what we've seen so far, we are confident in saying that Florida is having a robust season," Beth Mongiovi, a sea turtle researcher for the Florida Fish and Wildlife Commission, said by email. "As to this being a record year for loggerheads, it is too early to say."