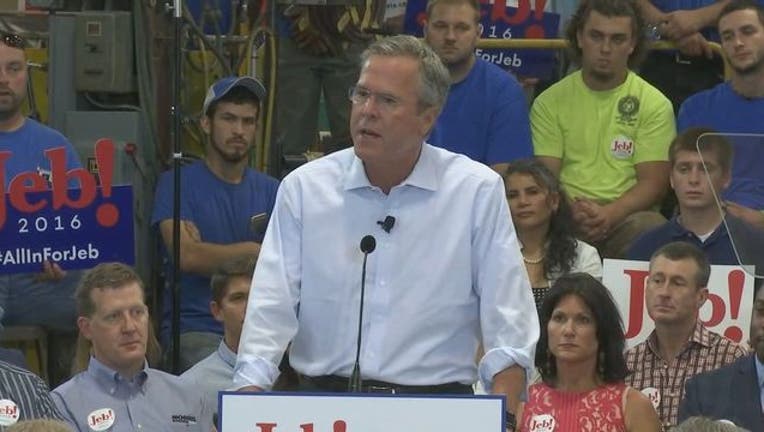 TAMPA (FOX 13) - As Americans filed their taxes this year, a record number said they're paying too much.

In a FOX poll, 63 percent said they're overtaxed. And Jeb Bush is responding to that frustration with his new plan to simplify the tax code.

The Bush plan collapses the seven tax brackets down to three. You'd pay 10, 25 or 28 percent depending on how much you make. He also wants to increase the standard deduction.

"We're lowering rates for everybody," said Bush, "so if you're a family of four making $40,000, you're not going to pay income taxes."

Bush also plans to end the tax on estates after people die, and he wants to cut the tax rate on corporations from 35 percent to 20 percent.

"I believe we should be tearing down these barriers and let Americans pursue their dreams in all kinds of crazy ways," he said. "We need to let the big dog eat."

The Democratic National Committee claims this plan would give more breaks to the wealthy while exploding the deficit, or shifting the burden to working class families.

Bush said he would help pay for this plan by taking away some deductions or loopholes for the wealthy. Specifically, he'd impose a one-time tax on corporate money overseas, and make hedge fund managers pay higher tax rates on their investments.