More red tide is starting to pop up around the Bay Area, killing fish and giving people respiratory problems. Experts say it also carries a toxin that could make seabirds ill.

ST. PETE BEACH, Fla. - Coughing, sneezing, and an itchy throat are not symptoms normally associated with a trip to the beach, but with red tide intensifying on the coast, it's the reality.

The nuisance of red tide blooms is expected each year, but anglers say seeing the blooms off the Pinellas County coast in mid-June is early -- and nerve-racking -- because of nutrients in the water from the piney point spill in April, warm water temperatures, and rain.

"All of this is creating like the perfect environment for the red tide which we already have starting and typically these blooms occur later on in the summer, now we're just in June. What is going to happen?" wondered captain Karen Hughart. 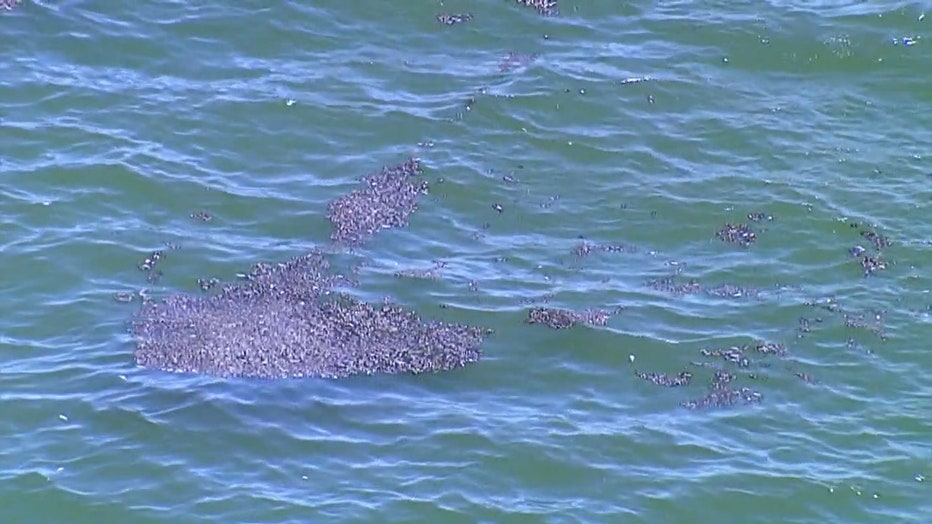 The Fish and Wildlife Commission detected high levels of red tide off the coast of Redington Beach and in Boca Ciega Bay near war Veterans Memorial Park.

Officials at Seaside Seabird Sanctuary say red tide carries a neurotoxin called brevetoxin which is the root source of illness for seabirds.

Although Bay Area beaches seem to be back to normal after almost a year of red tide, Pinellas County hosted a special summit to discuss the toxic algae bloom and concerns that continue to loom.

Seabirds can be exposed to brevetoxin when they eat contaminated food sources like fish. Sanctuary doctors say birds suffering from brevetoxicosis can have a loss of motor functions and the ability to fly. Eventually, their organs will shut down and the birds will die.

"With the unpredictable nature of these blooms, our hospital expects to continue to see an influx of sick birds throughout the summer. Even when the blooms dissipate, many food sources remain contaminated with the brevetoxin and birds will continue to become affected for extended periods," Seaside Seabird Sanctuary hospital director Melissa Edwards said in a statement.

The sanctuary is asking the public to report birds showing signs of toxicity – birds that are unable to stand or walk, fly, and appear unsteady. Reports may be made by calling 727-391-6211, option 1.

"If safe to do so they can also throw a towel over the sick bird, place it in a box, and bring it directly to our hospital," Edwards said.