How Gatorade was invented

TAMPA, Fla. - Fifty years ago -- on October 2, 1965 -- history was made, changing the lives of four University of Florida scientists, an entire campus, the sports world, and eventually scores of people in need of organ transplants.

On that fateful day, the scientists unveiled their invention: Gatorade.

Today, the sports drink is an iconic symbol of successful on the playing field, as winning football coaches are traditionally doused in sideline Gatorade bucket showers.

Back in November 2001, FOX 13's John Wilson sat down with Dr. Dana Shires, Dr. Jim Free, Dr. Alex de Quesada, and Dr. Robert Cade (who has since passed away) and talked to them about their extraordinary invention and Gatorade’s legacy.

As traditions go, getting drenched by Gatorade is the wettest, and symbolizes sweet success on the football field. For the Gatorade inventors, three of whom call the Tampa Bay area home, it is the ultimate honor.

"I made a poster one day and put it up on the door," recalled Dr. Jim Free. "Dr. Cade's lab, home of Gatorade, handmade by licensed physicians. And the name stuck."

That was the mid-60's, the birth of Gatorade at the University of Florida.

"Heck, at that time I made my life working with wee-wee," deadpanned Dr. Robert Cade, who was Gatorade’s lead scientist.

Dr. Cade, a kidney specialist, whipped-up the first batch of Gatorade in this Gainesville lab. 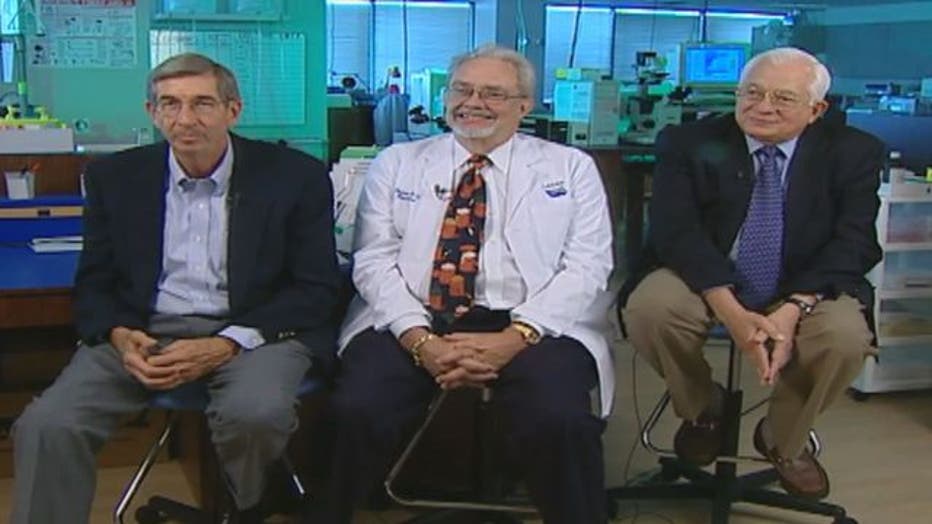 "We kind of called it instant sweat for a while there," said Shires.

It all began with the sweat of the Gator football team. Football players were passing out from dehydration in August, and the scientists said, "There must be a better way."

They set out to find something better than water that would help the body recover faster. What became the main concentration of ingredients in every bottle of Gatorade was the result of a eureka moment.

"I decided what the content of Gatorade would be riding home one afternoon on my bicycle," said Dr. Cade.

In 1966, Florida players drank Gatorade for a full season. Their record was 9-2. Quarterback Steve Spurrier drank Gatorade from a milk carton. He won the Heisman Trophy that year.

"I don't know how much Gatorade had to do with that," said Spurrier. "It really tasted awful. It was bitter."

Dr. Cade asked his wife what he could do about that and she said put lemon juice in it. No surprise that lemon-lime became the first Gatorade flavor.

"I remember staying up late at night squeezing lemons in giant vats," said Dr. Shires as he laughed.

As Gator teams got stronger and wore down opponents in the second half, stories about this secret concoction went nationwide. They were getting letters from people all over the world.

Dr. Cade's group knew they were onto something and approached administrators at the university.

"We've come up with this idea and well give it to you, if you will take it and run with it," Dr. Shires said. "And they specifically said, 'You guys think we're nuts? We're not in the soft drink business, so you go on and do what you want to do with it.'"

So they did. Gatorade became the world's first sports drink. A financial windfall followed.  After Gatorade hit the market, the university came calling.

"They came and said, 'Hey, you couldn't do that because you were developing that while an employee of the university. It belongs to us,'" Dr. Shires recalled. He and the other doctors emphasized that they developed Gatorade on their own time. In the end, the university got a piece of Gatorade royalties -- a big piece.

Dr. Shires said, second only to the state of Florida, Gatorade provides more income to the University of Florida than any other single source.

As for the inventors, they discovered great wealth, too.

"I think Gatorade allowed us to practice the type of medicine that we wanted," said Dr. de Quesada.

In Tampa, their Gatorade money helped build the groundwork for life-saving medicine.  In the early 1980's, they established a foundation, Lifelink, which pioneered regional organ transplants.

Gatorade has become more than a $2-billion a year drink that was created from common ingredients worth no more than pocket change.

That's what you call making a splash.