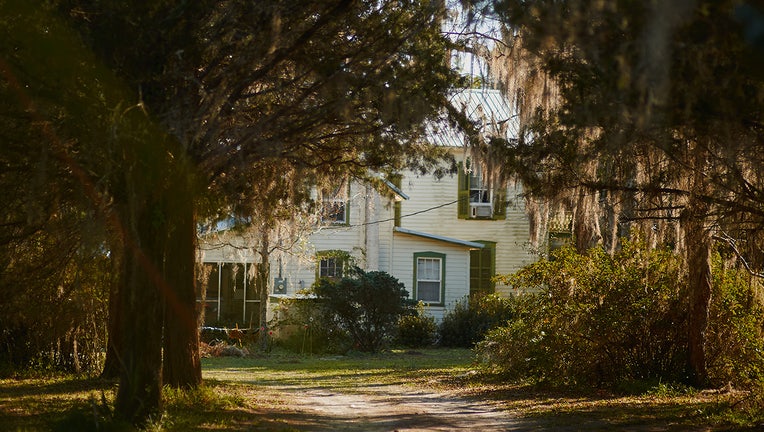 The Wright House, where John Wright helped black residents of Rosewood flee the massacre, is seen from the road in Rosewood, Florida on Wednesday, January 1, 2020. (Zack Wittman for The Washington Post via Getty Images)

ROSEWOOD, Fla. - As each new year approaches, Ebony Pickett looks back to the dark history of the massacre that began in the little-known majority-Black enclave in Rosewood, Florida, on Jan. 1, 1923.

Pickett, descended from residents of Rosewood, feels the legacy of the massacre in personal ways. She was one of the first students to receive a Rosewood Family Scholarship from the state after Florida passed reparations legislation a quarter-century ago.

As the call for reparations for the Black community in America has gotten louder in recent years, the story of the Gulf Coast town of Rosewood, and Florida’s measures to repair the harm done, has received more recognition.

On that first day of 1923, a white woman in the neighboring community of Sumner alleged that she had been attacked in her home by an unidentified Black man, according to a 1993 report written by five scholars for the Florida Board of Regents. As the news of the woman’s report spread to the white community, violence broke out. Many of the town’s Black residents fled into the swampy woods in record-cold winter temperatures. A Black church was burned, and then six days later, a mob of at least 100 white people "gathered and watched" the burning of the remaining structures in the Black part of Rosewood.

The report notes that a grand jury found "insufficient evidence" for prosecution despite the fact that eight people — six Blacks and two whites — died in the violence. But those figures have long been questioned and countered: "The question of how many people died remains, however, and it may never be solved." 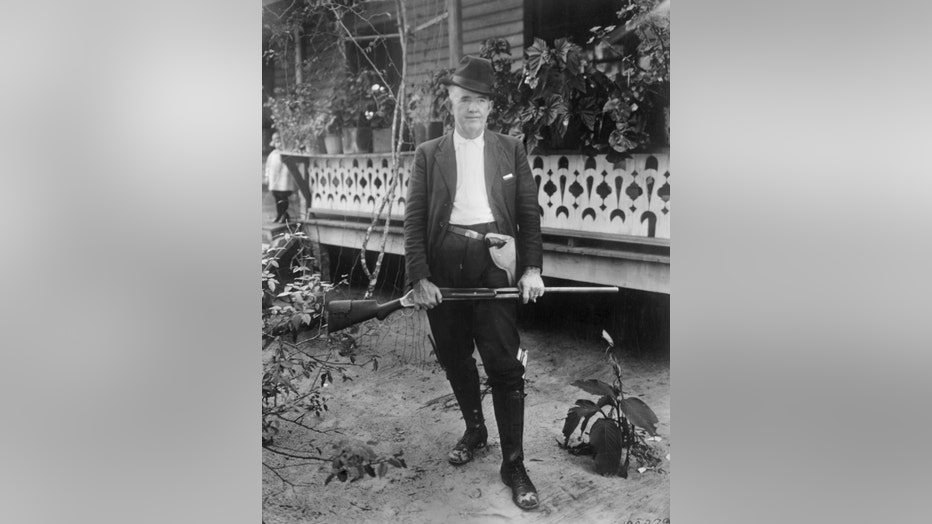 Levy County Sheriff Robert Elias Walker holds a shotgun reportedly used by Sylvester Carrier, black resident of Rosewood, to shoot and kill two deputized white men who were at his door in 1923. Carrier was killed when the other deputies returned fire

Two years earlier, in Tulsa, Oklahoma, the district known as "Black Wall Street" was destroyed by a mob after a Black man was accused of assaulting a white woman. The centennial of that massacre will be commemorated this spring. Rosewood had a much smaller Black community, but it, too, had Black businesses, as well as a private school and a baseball team.

"This is a travesty that’s happened to my family," said Pickett, now the president of the Rosewood Family Reunion and director of choirs and the young people’s department at New Bethel African Methodist Episcopal Church in Lacoochee, about 100 miles from Rosewood.

"We were thriving, we were surviving, and we’re able to have the government to actually give us reparations," said Pickett.

"In America, as an African American, I do feel that reparations are definitely warranted," she said. "Rosewood is a great example that it can definitely be done."

Sherry Sherrod DuPree, a Florida historian who has spoken widely on the Rosewood incident, noted that the word "reparations" was not used during the discussions seeking compensation. The special master to the Florida House of Representatives concluded in his 1994 final report that "the claimants have met the test for an equitable claim bill by showing that a moral obligation exists to redress their injuries."

"They did not use the term ‘reparations’ because a lot of the people that were in authority thought it was a dangerous term," DuPree said.

The reparations have not undone what happened almost 100 years ago. As they scattered in 1923 — some escaping by train — survivors of the violence moved to other parts of Florida and other parts of the country, some fearful "until the day they died," said Pickett, that they could have been followed by the same mob members who destroyed their homes.

All that remains in Rosewood today is the house where a white merchant lived and a historical marker. 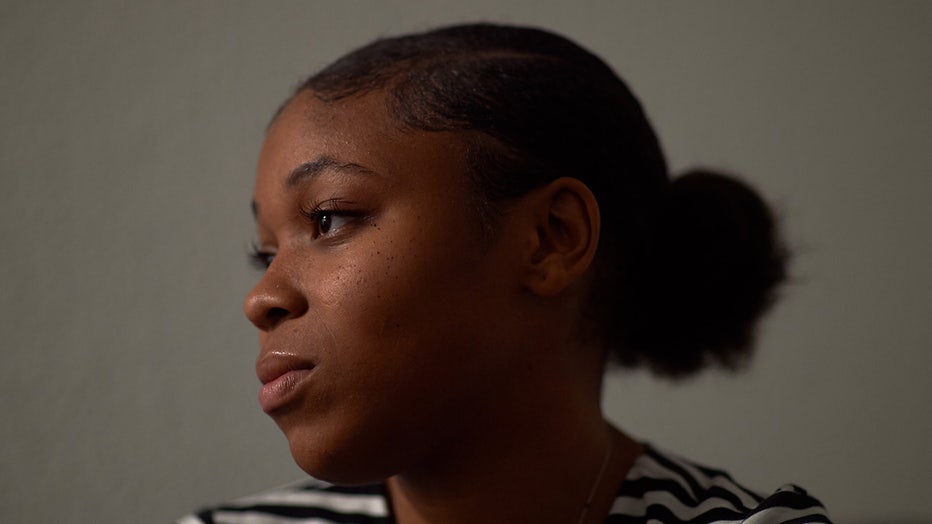 Morgan Carter, a Rosewood scholarship recipient, discusses the Rosewood massacre and her family's relationship with the scholarship at Florida Agricultural and Mechanical University, a historically black university in Tallahassee, Florida on Thursday

As the family members came together again, they decided their motto was "We’ve Come This Far by Faith," a popular hymn in AME and Baptist churches.

"Being so driven by our faith, that is what has kept the family together because our family has been separated," said Benea Denson, 36, the Rosewood Family Reunion correspondence secretary who lives in Zephyrhills, about 100 miles south of Rosewood.

"There are people who went all over the place when they left Rosewood. And some people changed their names."

Nevertheless, the descendants of those who suffered or survived that violence believe that reparations that resulted from the lost land and way of life can be an example for others. 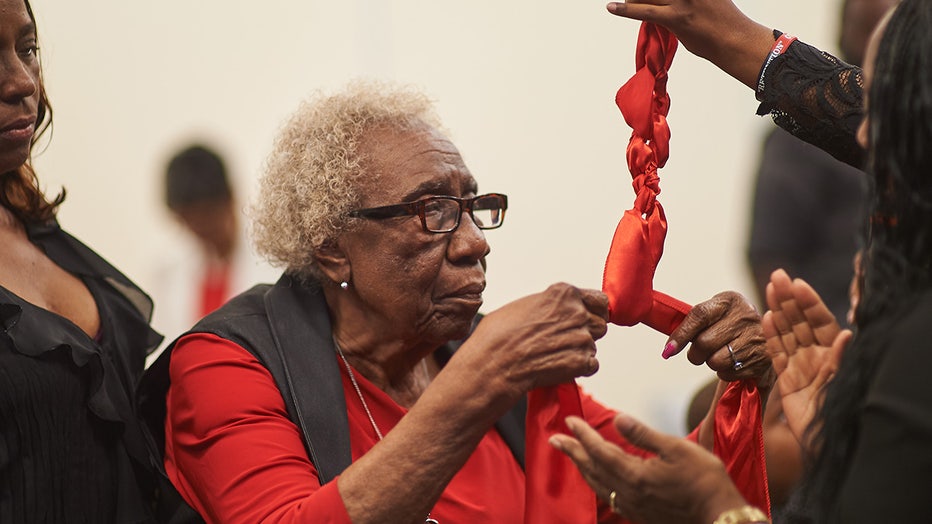 The eldest present descendent, Altimese Wrispus, ties the final knot in a ceremonial piece of fabric, used to symbolize the bond of Rosewood descendants at the 34th Annual Rosewood Family Reunion at Hilton Garden Inn in Wesley Chapel, Florida on Satu

The state’s special master on the Rosewood case recommended payments of $150,000 each to survivors, which were given to nine individuals, and the establishment of the state scholarship fund for descendants. The Rosewood Family Scholarship has since benefited more than 290 recipients and currently pays a maximum of $6,100 an academic year to direct descendants who apply and verify their family connection.

Older descendants of Rosewood warn that, even if they are successful, struggles for reparations take time and perseverance. There were several versions of the Rosewood compensation package before the final one was signed into law.

And its passage did not pave a smooth path for everyone. Survivors no longer qualified for benefits such as Medicaid when they received the money and ended up paying medical costs out of pocket. Students who lived or chose to attend schools out of state couldn’t get the scholarship or had to pay higher tuition prices if they returned to the state for college.

Nevertheless, Rosewood family members still say their efforts could be mirrored by others.

In recent months, some religious groups have taken action on reparations. The Minnesota Council of Churches has launched a "truth and reparations" initiative and several Episcopal dioceses and a New York church have started reparations programs. The Rosewood families, including members rooted in Baptist and African Methodist Episcopal churches, tie their ancestors’ survival to their faith.

For decades, many of the survivors wouldn’t talk about what happened, even among themselves. When they began gathering annually in 1985 for a three-day reunion, including a church service and lighting candles or tying knots in honor of the people who died, those who survived and their descendants found a place to share their secrets. Others started telling the stories through foundations that continue to seek ways to highlight them.

Janie Bradley Black, who lives in Miami and is a member of a Missionary Baptist church, recalls how her grandfather — who used to sing a hymn about God’s coming judgment called "That Awful Day Will Surely Come" — told her of his experience in Rosewood.

"He was one of those men that he said what he meant; he meant what he said," said Black, 85, who was a longtime president of the Rosewood Heritage Foundation. "I’ve seen him cry but it was when he was telling me what he went through when he had to leave his hometown and that was Rosewood."

Gregory Black, 63, who has succeeded his mother as president of the Rosewood Heritage Foundation, said he hopes the next generations, including scholarship recipients, will continue to share their families’ heritage. He added that it’s important to continue to work on healing as they acknowledge what happened to their ancestors almost a century ago.

"They left with nothing and they couldn’t return to get whatever they had," he said. "Livestock was gone, houses burned to the ground, couldn’t go to church."

Maxine Jones, the principal investigator for the report to Florida regents, said she also thinks the results for the Rosewood survivors and descendants could influence new initiatives, such as a suit filed this fall about the 1921 race massacre in Tulsa. She quoted a friend’s comment about the compensation they received.

PREVIOUS: Ocoee massacre to be taught in Florida schools, according to newly-signed law

In 2004, 10 years after the compensation legislation, a two-sided marker was placed on State Road 24 to note where the community once lived. "Those who survived were forever scarred," it notes.

The highway marker was co-sponsored by the state and the Real Rosewood Foundation.

Lizzie Robinson Jenkins, founder of that foundation and a historian at her Baptist church, held a peace and healing ceremony at the site of the marker on Jan. 1, 2020. Her aunt was married to a Rosewood resident and taught at the school in the enclave of "hard-working people" before it was burned in 1923.

"She was traumatized for the rest of her life and she lived 25 years," said Jenkins, 82, of her aunt. "These people still need to be healed. They are not healed."

Pickett, Denson’s older sister, said she doesn’t personally consider Jan. 1 to be a challenging time but rather an opportunity for a fresh start.

"It’s a proud moment for me now," she said. "Because I have used this tragedy and I’ve turned it into a powerful tool to educate my children and to keep our story alive and to keep our family’s legacy alive."

This content is written and produced by Religion News Service and distributed by The Associated Press. RNS and AP partner on some religion news content. RNS is solely responsible for this story.