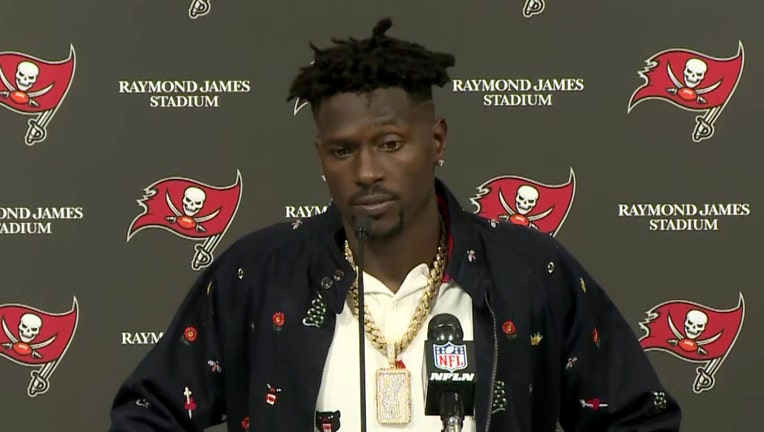 TAMPA, Fla. - A report from the Tampa Bay Times says Buccaneers receiver Antonio Brown provided the team and the NFL a fake COVID-19 vaccine card, according to Brown's former live-in chef, to whom Brown owes $10,000.

The report alleges Brown's girlfriend and the chef, Steven Ruiz, discussed, via text, the possibility of obtaining a vaccination card and a price of $500. The Times says the text messages do not mention Brown by name, but refer to "A.B.," a nickname used by Brown's friends.

The Times report says Ruiz did not provide Brown with a fraudulent vaccine card, but Brown later showed Ruiz what Brown said were fake cards he purchased for himself and his girlfriend.

The Buccaneers released a statement after the Tampa Bay Times' report, saying:

"After an extensive educational process conducted throughout our organization this past offseason highlighting the benefits of the COVID-19 vaccines, we received completed vaccination cards from all Tampa Bay Buccaneers players and submitted the required information to the NFL through the established process in accordance with league policy. All vaccination cards were reviewed by Buccaneers personnel and no irregularities were observed."