Rescuers shave off 78 pounds of matted wool from abandoned sheep

LANCEFIELD, Australia - Rescuers in Australia saved an abandoned sheep who was weighed down with an astonishing 78 pounds of matted wool.

Edgar's Mission, an animal sanctuary near Melbourne, came to the rescue of the sheep after a good Samaritan spotted the animal wandering in a forest.

The rescue said it appeared the sheep, now named "Baarack," had once been owned and had an ear tag that appeared to have been torn out by the thick matted fleece around his face.

Kelly Dinham with Edgar's Mission told FOX 13 that sheep need shearing at least once a year; otherwise, the fleece continues to grow and grow.

Baarack struggled in the wild due to the thick matting of wool, which weighed him down and partially covered his face. Rescuers said he managed to survive by eating grass and drinking water from puddles.

"He was underweight, and due to all of the wool around his face he could barely see," Dinham said. "The weight of the wool too had pulled so much on his lower eyelids that they had sagged... with grit and debris pooling in the gap between his cornea and the lid."

Rescuers sheared off 78 pounds of wool, finding sticks, twigs and insects in the mass of matted fleece. Dinham said they believe it's the second-highest recorded weight of fleece. 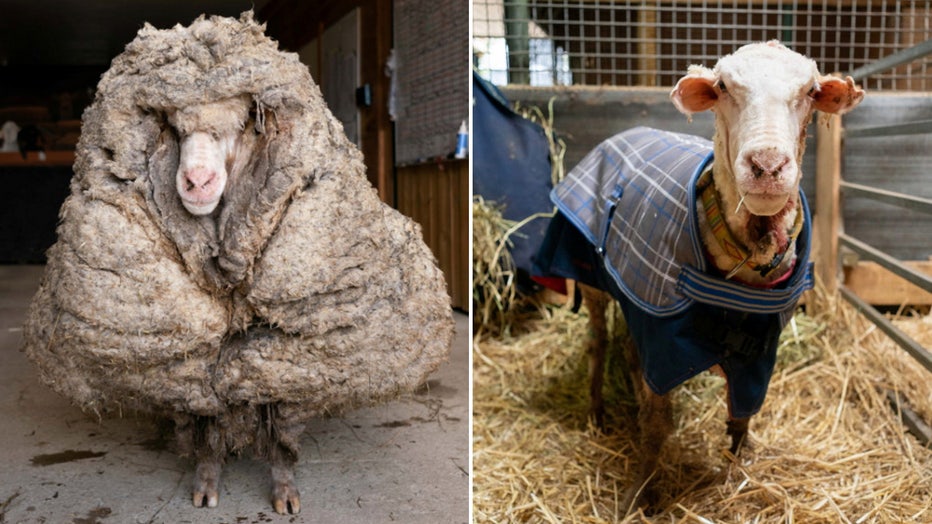 Baarack the sheep seen before and after rescuers sheared off 78 pounds of matted wool. (Photos: Edgar's Mission)

USA Today reports the world record belongs to another Australian sheep, which was rescued by Little Oak Sanctuary in 2015 with a whopping 90 pounds of matted fleece needing to be sheared.

"This is no title to covet, as it amounts to being the most neglected sheep in the world," Little Oak Sanctuary said.

RELATED: An endangered species in the U.S. has been cloned for the first time

Edgar's Mission said Baarack is recovering well and is able to walk more easily after being freed from his massive coat.

"He is doing so well today, surprising us really and becoming more trusting too," Dinham said. "We truly believe that he understands what we have done for him has eased his life and turned it for the better."