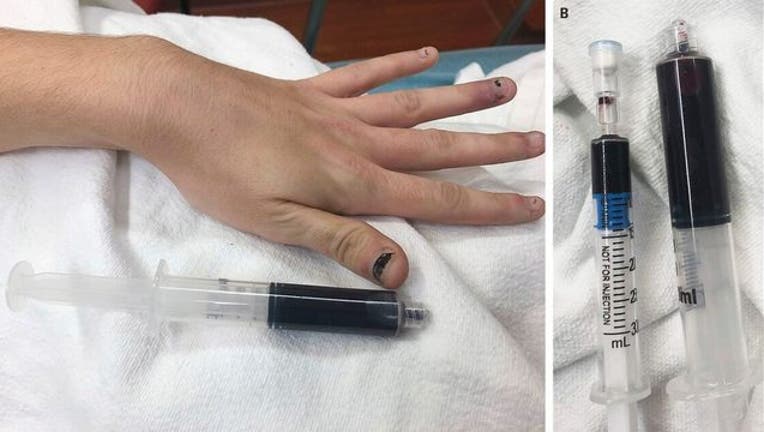 The woman's blood turned a black color after she used medication to treat a toothache. (The New England Journal of Medicine ©2019.)

FOX NEWS - A Rhode Island woman’s blood turned a black-blue color — a sign of a potentially deadly blood condition —  after she took a common over-the-counter medication to relieve a toothache.

In a case report recently detailed in the New England Journal of Medicine (NEJM), a 25-year-old woman, who was not identified, arrived at a local emergency room with weakness, fatigue and shortness of breath. Her skin was also discolored, doctors wrote.

The woman, who was quickly diagnosed with cyanosis — a condition that’s typically characterized by low oxygen levels in red blood cells and causes the skin, lips, tongue, hands, feet and other parts of the body to turn a bluish color — also had an abnormally high respiratory rate of 22 breaths per minute. A normal rate for an adult at rest is 12 to 20 breaths per minute, according to the Cleveland Clinic.

The woman also had an oxygen saturation, or blood oxygen level, of 88 percent — much lower than normal levels, which typically fall between 95 and 100 percent.

“The oxygen saturation value displayed on the pulse oximeter did not improve with the administration of supplemental oxygen,” doctors wrote, meaning the woman’s levels did not improve when she was provided additional oxygen.

The woman was subsequently diagnosed with methemoglobinemia, a blood disorder that can be congenital but can also be acquired, as in the patient's case. Methemoglobinemia — which, in simplest terms, is a disorder in which the body’s cells do not receive enough oxygen due to an overproduction of methemoglobin  — can occur following “exposure to certain medicines, chemicals, or foods,” Healthline states.

The condition can be life-threatening if left untreated.

Doctors determined the woman developed methemoglobinemia after using “large amounts” of topical benzocaine, which she said she used the night before her hospital visit. She applied the medication in an attempt to assuage a toothache, they wrote.

“Methemoglobinemia can occur after exposure to a number of medications, including topical anesthetic agents such as benzocaine, through metabolic pathways that appear to vary from person to person, which may account for the unpredictability of this complication,” the case report reads.

The Food and Drug Administration (FDA) in 2018 warned benzocaine-containing products should not be used to treat children under the age of two due to the increased risk of methemoglobinemia.

“These products carry serious risks and provide little to no benefits for treating oral pain, including sore gums in infants due to teething,” the federal agency said at the time.

The woman was treated with intravenous drugs and improved, according to the report.