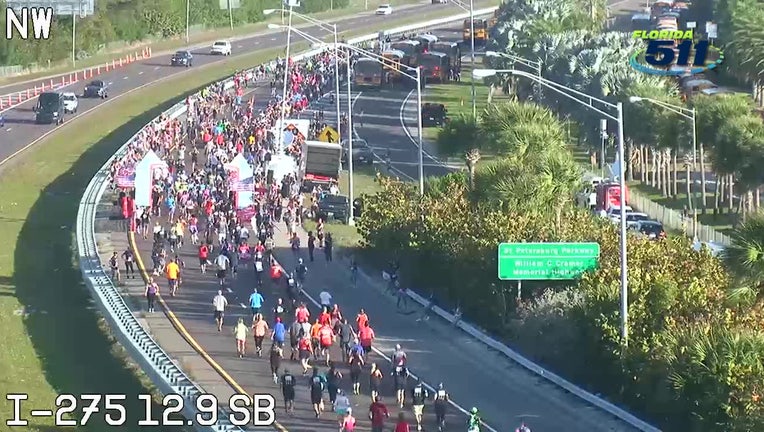 ST. PETERSBURG, Fla. - After being moved online last year, 8,000 runners laced up their shoes Sunday morning and returned to the Sunshine Skyway Bridge to compete in the fifth annual Skyway 10K to raise money for military families.

Runners began boarding buses at 4:45 a.m. at Tropicana Stadium and were driven to the start line, which was in Manatee County.

Northbound traffic on the Sunshine Skyway was closed from 3 to 11 a.m. on Sunday. However, a 52-year-old Sarasota woman, who was later arrested for DUI, drove around the barriers and crashed nearly head-on with a trooper protecting runners around 8:45 a.m. She and the trooped both suffered serious injuries in the crash.

According to the Florida Highway Patrol, no runners were injured in the incident.

Including the money raised on Sunday, the race has raised nearly $2 million for the Armed Forces Families Foundation over the past five years.

"We all know the sacrifices that our military make and if you work these veterans as I do, you hear the stories, you feel, it’s very compelling to be part of this event, you want to give back, this is our one chance I feel like we can really make a difference and we can give back," stated Nikki Austin with the Armed Forces Family Foundation.

The race costs $80 per person and runners were selected via lottery to participate. Organizers say 100 percent of the proceeds goes back to the foundation.

Since 2018, the Armed Forces Families Foundation says it has given nearly $2 million to the community for infrastructure projects that benefit military families.

The runners say they were happy to be back on the bridge this year after having the race go virtual in 2021 due to the COVID-19 pandemic.