DUNEDIN, Fla. - A second-hand store in Pinellas County has a special connection to Ruth Bader Ginsburg. Volunteers sent the Supreme Court Justice a gift last year, never expecting a response. It is now a cherished gesture.

In downtown Dunedin, one store is not focused on turning a profit.

“The more we make, the more we give away,” explained Miriam Benitez-Nixon.

The Little Thrift Shop is run by volunteers with the Episcopal Church of the Good Shepherd. In early 2019, a donation came in that Miriam said screamed Ruth Bader Ginsburg.

“You have to have chutzpah to wear that, and she did,” Miriam laughed.

It was an intricate, beaded collar.  The volunteers packed the necklace in a velvet box, penned a letter to the Supreme Court Justice, and mailed it to Washington DC, never expecting to hear back.

Then a letter arrived from RBG. 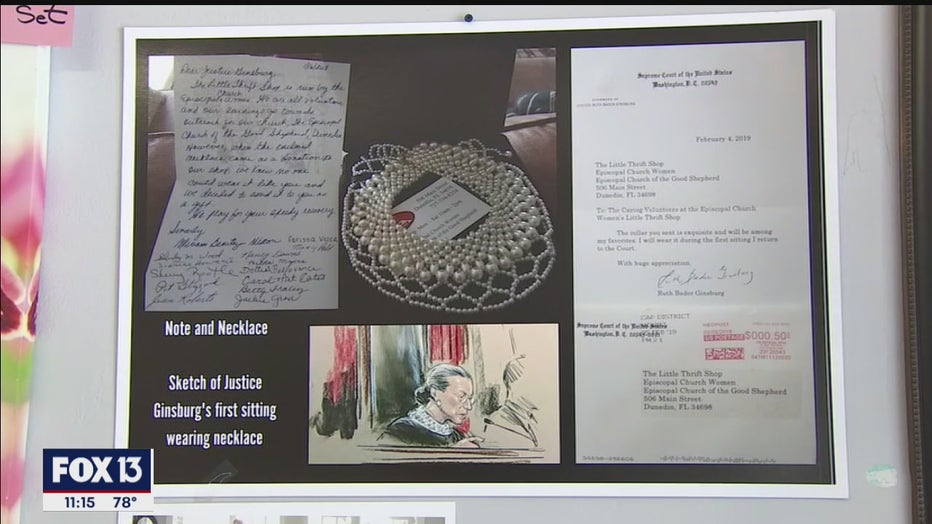 “The collar you sent is exquisite and will be among my favorites. I will wear it during the first sitting I return to the Court. With huge appreciation, Ruth Bader Ginsburg”

The then 85-year-old was home recovering from rib fractures, and lung surgery. The ladies do not know for sure but based on a courtroom sketch of Ginsburg’s first day back on the bench, they believe she wore the pearl collar.

The correspondence is a special connection with a woman many of the volunteers view as a role model.

Vigil in St. Pete to honor the memory of Ruth Bader Ginsburg

“She had that kind of personality that respected everyone,” said Pat Blizzard. She took a great deal of time listening and then explaining carefully her thought process, and that’s rare.”

“She’s a champion for women, if it wasn’t for her a lot of what we have that we take for granted today wouldn’t be here,” Miriam said.

The note from Ginsburg is now framed, and on display at the church.

Miriam also made a collage that is proudly on the wall at the thrift shop. It is now, an homage to the life and legacy of RBG.

“She left a big mark, hard shoes to fill even though they were tiny,” said Pat.

The same day Ginsburg died, The Little Thrift Shop volunteers also finally discovered who had donated the RBG-worthy necklace. Turns out, it came from a dealer who says he could not sell it.  Miriam and Pat say it was clearly meant for Ginsburg.