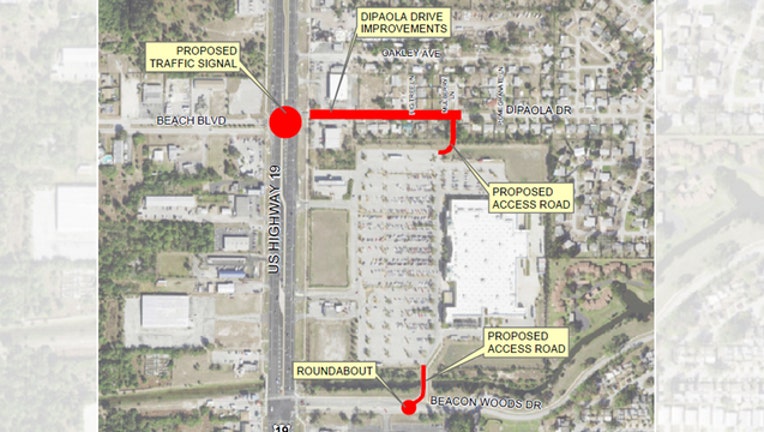 The improvements had been under consideration for years following several traffic fatalities near the store. Since 2014, eight people have died in crashes in the area near the Beacon Woods subdivision.

When leaving the supermarket, shoppers from Beacon Woods are forced to drive out to U.S. 19 before making a U-turn to get back to their subdivision. To the north of the store, shoppers living in other neighborhoods off U.S. 19, are also forced to face heavy traffic as they attempt to enter or exit their subdivisions.

Under the cost-sharing agreement approved by commissioners on September 18, the Florida Department Transportation will put in a new traffic signal for drivers using Dipaola Drive and Beach Boulevard to get onto U.S. 19. Walmart will pay for new entrances and exits -- along with road connections to both routes.

During the September 18 meeting, county commissioner Kathryn Starkey acknowledged that county officials bent to pressure from nearby residents who were worried about neighborhood cut-through traffic when the Walmart opened 11 years ago -- allowing for a dangerous pattern.

"Sometimes we need to listen to our traffic experts who are very knowledgeable about this kind of stuff, and not necessarily give in to the unfounded fears of people," Starkey told county traffic engineer Margaret Smith. "And how many lives have we lost?"

Starkey said she believed mistakes were made when county officials changed the requirements for the project.

"I just want to say that, just as a lesson learned. And now a costly fix is coming in," she said.

According to county engineer Margaret Smith,  there have been 200 accidents in the past six years. In addition to the 18 people killed, 75 others have been hurt.

Work on the roundabout is set to get underway in February 2020 with all the improvements expected to be complete the following year.