A San Francisco restaurant that ignited a frenzy when the owner and staff asked three armed police officers in uniform to leave because their weaponized dress made them feel uncomfortable has now apologized for the request, acknowledging that it handled the situation "badly." Greg Liggins reports.

SAN FRANCISCO - A San Francisco restaurant that ignited a frenzy when the owner and staff asked three armed police officers in uniform to leave because their weaponized dress made them feel uncomfortable has now apologized for the request, acknowledging that it handled the situation "badly."

In an Instagram post on Sunday afternoon, Rachel Sillcocks and Kristina Liedags Compton, co-owners of Hilda and Jesse in North Beach, wrote a mea culpa after getting battered on social media – and in Yelp reviews – for asking the officers to leave their restaurant last week. They declined to speak in person, citing the verbal attacks they were getting. Still, brunch was brisk earlier in the day and the restaurant was full of customers.

"We made a mistake and apologize for the unfortunate incident on Friday when we asked members of the San Francisco Police Department to leave our restaurant," they said in their post. "We are grateful to all members of the force who work hard to keep us safe, especially during these challenging times. We hope this will be a teachable moment for us as we repair and continue to build bridges with the SFPD. These are stressful times, and we handled this badly."

Their statement shows an about-face from what they wrote earlier this weekend, explaining that they asked the officers, strapped with guns, to leave the restaurant because it made staff and potential customers feel uncomfortable.

The controversy was kicked off when the staff at Hilda and Jesse posted on Instagram that they asked three officers to leave their restaurant on Friday.

"Three armed and uniformed police officers came in to dine at Hila and Jesse. Shortly after seating them, our staff felt uncomfortable with the presence of their multiple weapons. We then politely asked them to leave.

"At Hilda and Jesse, the restaurant is a safe space," the post continued. "The presence of the officers (sic) weapons in the restaurant made us feel uncomfortable. We respect the San Francisco Police Department and are grateful for the work they do. We welcome them into the restaurant when they are off duty, out of uniform and without their weapons." 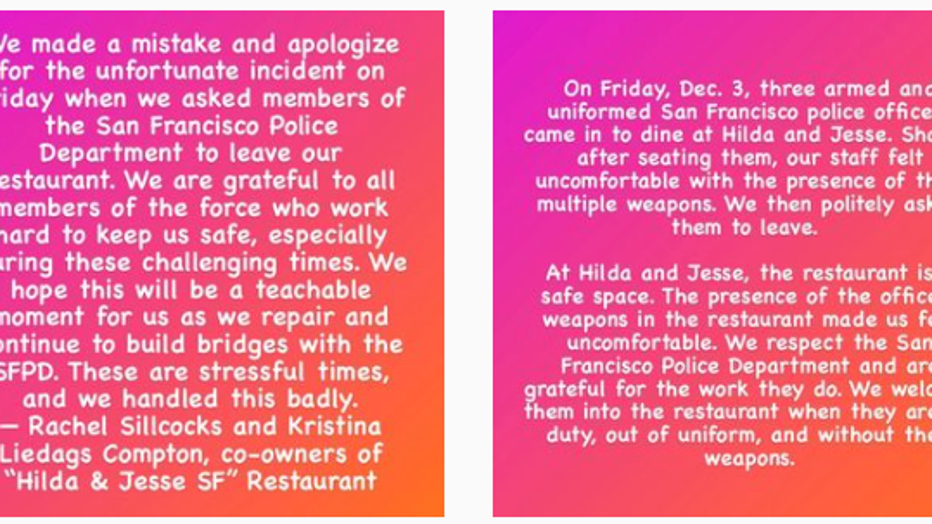 The statement also added that "this is not a political statement, we did what we thought was best for our staff."

The public conversation comes at a time when the nation is grappling with a defund the police movement on the one hand, and an opposing call for increased officers to deal with a rising number of homicides and retail thefts on the other.

San Francisco Police Chief William Scott tweeted a response on Saturday evening: "The San Francisco Police Department stands for safety with respect, even when it means respecting wishes that our officers and I find discouraging and personally disappointing.

"I believe the vast majority of San Franciscans welcome their police officers, who deserve to know that they are appreciated for the difficult job we ask them to do — in their uniforms — to keep our neighborhoods and businesses safe."

The chief got a mixed response from his Tweet thread.

One man wrote: "Send those officers over to Alameda..I'll buy them lunch at any restaurant they want to go to in my city ..we don't discriminate .."

But another person countered: "there is nothing safe or respectful about being heavily armed in a restaurant, if you don't understand how it can make the average citizen uncomfortable you're not doing very well with your 'community engagement.'"

In real life, people had different opinions on the polite stay-away order – and then the change of heart –  too.

Standing outside the restaurant, Scarlet Bush on Sunday told KTVU that she actually thought it was nice that the employees at the restaurant felt safe to express themselves.

Kevin Clauson of San Francisco took the side of the restaurant, saying that "anytime the police enter our community, it always makes me less comfortable, at all times."

And yet, Terence Ng of Hayward said that police always have their weapons, which they carry to protect citizens. He said with the uptick in crime, he's happy to have the armed officers around. He also thought it was rude to allow the officers to enter the building and be asked to leave after they sat down.

This is not the first time the issue of welcoming, or not, police officers into a restaurant has reared its head in the Bay Area.

In March 2018, an Oakland police sergeant was denied service by employees at Hasta Muerte Coffee, a proudly anti-establishmenti coffee shop in the Fruitvale District.

The move sparked protests outside of the coffee shop where self-described patriots toting American flags descended there, shouting at customers patronizing the shop.