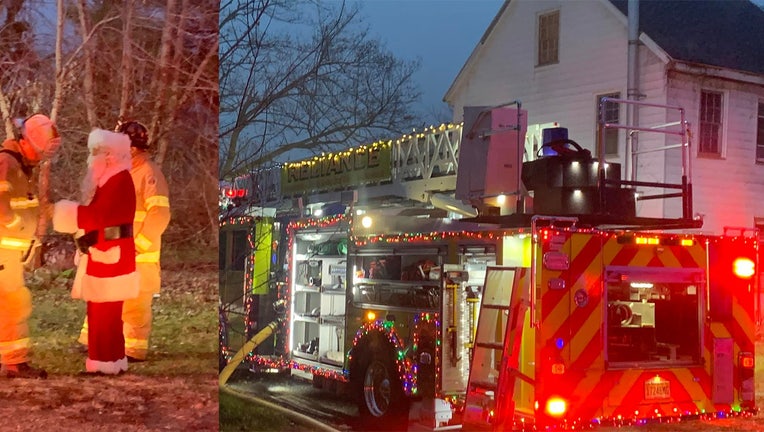 Images provided by Reliance Fire Company show Santa Clause and a fire truck at the fire.

NEW JERSEY - Santa to the rescue!  He helped firefighters save Christmas for one New Jersey family.

It happened Saturday afternoon in Salem County, New Jersey.  The Reliance Fire Company was participating in the annual Santa ride through Pilesgrove Township and Woodstown Borough.

A crew of six firefighters was escorting Santa on the company’s ladder truck on Auburn Road in Pilesgrove Township.

While traveling past 176 Auburn Road, the crew riding atop the ladder truck observed smoking coming from the eaves of the 3 story home.

The crew immediately stopped the truck and went to the side door of the home to check for any occupants.

They saw a woman as they went into the home.  She said that she had recently lit the home’s woodstove but was unaware of the smoke in the eaves.

Santa helped the firefighters evacuate the woman and five children as other members of the crew went to the second floor and found a fire burning the wall above the wood stove.

The crews used hose lines from the ladder truck, which was still illuminated with Christmas lights, to fight the fire.

Santa Claus helped feed the hose line into the home.

The fire was under control in about 30 minutes and no one was hurt.

The home was deemed uninhabitable after the fire and the Red Cross provided assistance to the 3 adults and 5 children who lived in the home.

The firefighters and Santa continued their tour after the fire was put out.