Anti-mask parents sound off at school board meeting

SARASOTA, Fla. - During a lengthy Sarasota County School Board meeting, including comments from more than 50 citizens and the removal of a few who refused to wear face coverings, members weighed whether to continue requiring face coverings in schools.

The board ultimately voted 3-2 to approve continuing the mask mandate. The long-term policy makes masks mandatory until June 30, 2021 "unless extended or amended prior to that."

Meanwhile, two groups of parents gathered outside the meeting, in a faceoff over face masks. The parents believe face masks are not favorable for their students.

After one speaker refused to wear a mask, school board members cut her mic. The next speaker had to be removed for the same reason and the meeting was paused.

Like them or not, school board members say they need to do what's best for students.

“The bottom line is we’ve got to follow what the CDC says, the Department of Health says, and the science says, masks keep down the spread. Look at our dashboard on our website, you can see the spread is coming into the schools, but not beyond the schools, that’s what important. If a student comes in the school that tests positive, we quarantine the students and it is not spreading within our schools. That’s what the mask policy is doing, that’s what it’s meant to do and its succeeding right now,” said Shirely Brown, the vice-chair of the Sarasota County School Board.

Parent Sharon Kunkel agreed, “We believe wearing asks is essential, we believe that you should listen to doctors and public health officials, the virus doesn’t care about our political affiliation or our feelings so let’s listen to the experts and do the right thing to protest ourselves and each other.”

The group of parents opposed to masks has raised just over 11,000 to hire an attorney to oppose the mask mandate from the district. They believe it's an overstepping of boundaries and their students’ rights. 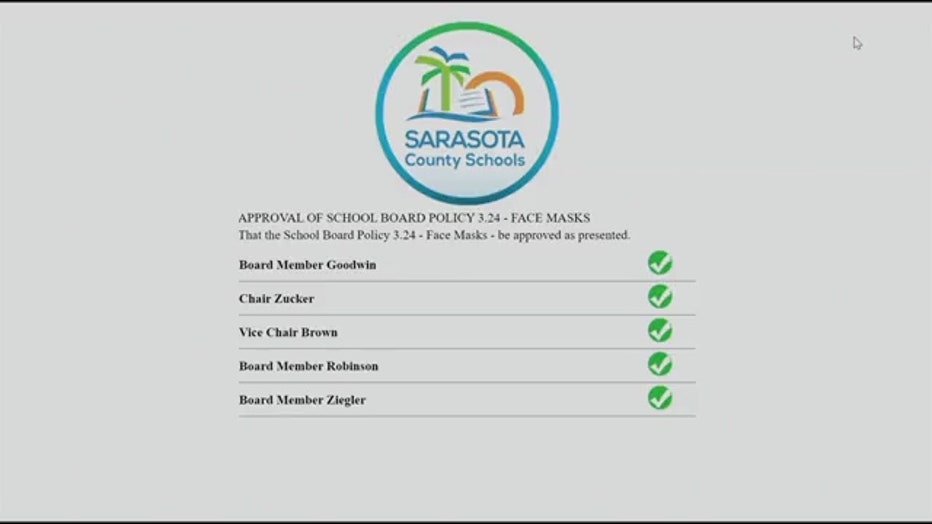 During Tuesday's school board meeting, an apparent mistake indicated the board voted unanimously to approve requiring masks in schools

In an apparent mistake during voting on another topic, the board's live stream indicated there was a unanimous vote to approve the long-term mask policy.