SARASOTA, Fla. - After hours of public comment and several recesses to calm a heated gallery, the Sarasota County school board voted 3-2 Friday night to implement a 90-day mask requirement for students and staff.

During the emergency meeting, the board amended so-called option 3 – a 90-day mask mandate to mitigate the spread of COVID-19 – to say the requirement would be dropped if the county’s positivity rate fell below 8% for three days in a row, and would be brought back if positivity went back up above 10%.

The positivity rate in Sarasota County was more than 18% at the time of the meeting.

The mandate only offers an opt-out with a doctor’s note or Individual Education Plan (IEP).

Parents and community members lined up to address the board before they discussed and voted on the measure. More than 80 people were allowed 3 minutes each, with the board having to take multiple recesses as outbursts from the crowd disrupted the proceedings.

The emergency meeting, discussing school mask mandates, had to be paused due to interruptions from the public.

She was frustrated after the meeting -- at the crowd and Governor DeSantis, who banned school mask mandates before the year started.

"He's giving conflicting messages. On the one hand, [DeSantis is] saying you have to have them in school, but on the other hand, he said you can't do anything to keep them safe," she said.

MORE: Ease your mask mandates or pay up, Fla. Board of Education warns districts

Sarasota is now at least the sixth district to require masks, ignoring the governor's order.

The superintendent had this warning before the vote.

"I just want to make sure that we are careful not to break the law.

And the state has given 48 hours' notice to two districts – Broward and Alachua – before docking the pay of district leaders who ignored his order.

During a school board workshop Tuesday morning, Superintendent Dr. Brennan Asplen said the quarantine situation has the district on the verge of a staffing crisis.

"The quarantining has resulted in many, many, many employees and students being out of school and out of work," he told members.

The board also heard from Dr. Manuel Gordillo, an infectious disease specialist from Sarasota Memorial Hospital. He recommended strengthening all mitigation efforts, including a mask mandate.

"I would say I would not allow opt-outs," Gordillo told the board. "You know, once that medical crisis is alleviated, then we can have a conversation about that." 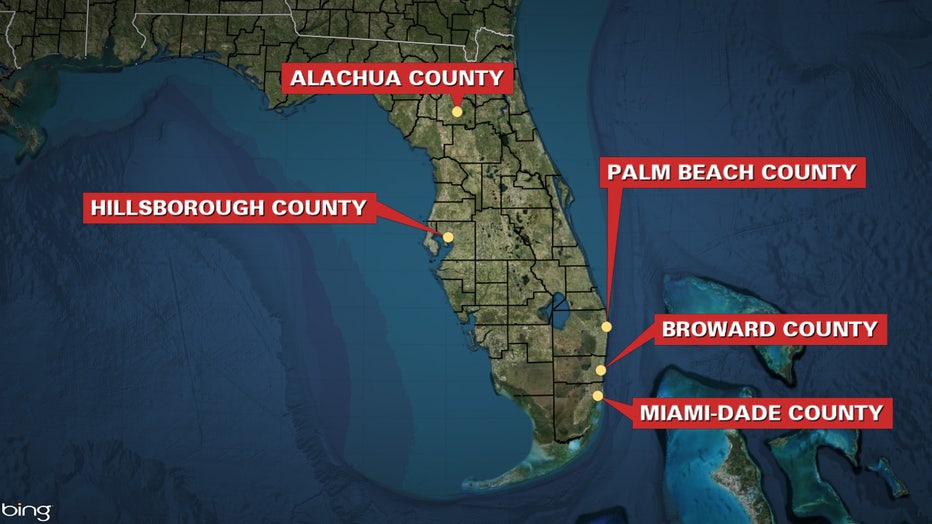 Five school districts in Florida are defying the governor's ban on mask mandates in schools.

Sarasota County joins Hillsborough County, which voted Wednesday to do the same. Hillsborough, Broward, Miami-Dade and Palm Beach -- have now violated the governor's order by passing mask mandates, along with Alachua. All are requiring students to wear facial coverings unless they get a doctor's note.

Meanwhile, the governor's office responded by saying that forced masking infringes on parents’ rights.  Local educators could face penalties from the state, including docking board member pay or even removing elected officials who vote to violate the governor's orders.

The White House has since committed to using federal aid to support school districts that are penalized after putting safety measures in place.

Healthcare workers are exhausted, stretched thin, and working to save lives 18 months after the pandemic began. Now, some of them are sharing their stories in hopes of encouraging the holdouts to get vaccinated.

In late July, the Florida Chapter of the American Academy of Pediatrics issued the following statement supporting the continued use of masks in schools:

"Since children under 12 years of age are still not yet eligible to receive the COVID-19 vaccine and the vaccine will most likely not be available for this age group until winter of 2021, most children are still at risk for Coronavirus infection and transmitting the infection to others," the group said, pointing out that both the American Academy of Pediatrics and the Centers for Disease Control and Prevention recommend masking in schools.

"The Florida Chapter of the American Academy of Pediatrics (FCAAP) supports the continued, universal use of masks and physical distancing in schools by all individuals including students, faculty members, and staff through the end of the 2021-2022 school year. Masking should be in addition to the continuation of testing protocols in schools to mitigate the spread of infection. Finally, and most importantly, FCAAP recommends that all vaccine eligible children, faculty, and staff in schools should be vaccinated."

Sarasota School Board chair Shirley Brown on Tuesday also underlined the vaccine eligibility issue for younger kids.
"This delta variant is going after our elementary students," she said, "who are not vaccinated."