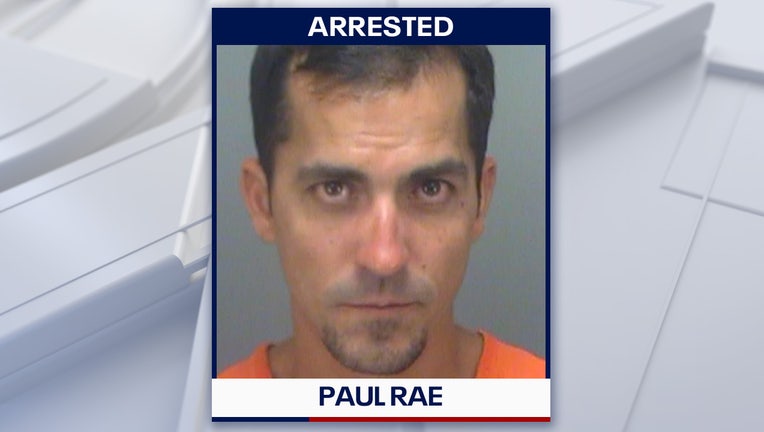 PCSO booking photo of Paul Rae from a 2017 arrest on a charge of resisting an officer.

SEMINOLE, Fla. - Another Bay Area man has been arrested in connection to January’s U.S. Capitol riot.

Paul Rae of Seminole is charged with knowingly entering a restricted building as well as impeding an official proceeding -- which was the counting of electoral votes.

The 38-year-old was released on a $25,000 bond and will remain under house arrest while wearing a GPS monitor. He must also surrender his firearms.

According to the Tampa Bay Times, federal prosecutors describe Rae as an associate of the "Proud Boys." They say he travelled to DC, then entered the Capitol building after someone smashed open a window.

Rae is due back in court later this month.

Federal prosecutors say Robert Palmer is captured on video spraying a fire extinguisher at Capitol police and then throwing the empty canister at them.

A Lakeland woman has been arrested after FBI investigators say she took part in the Capitol riots on Jan. 6.

Federal prosecutors say Graydon Young of Englewood was among the group of rioters that stormed the U.S. Capitol on January 6. Now he's in federal court in Tampa facing the consequences.

Paul Hodgkins from Tampa is one of the faces seen around the world during the Capitol riot last month. He will virtually face a federal judge Wednesday.

A former Florida police officer and Marine Corps veteran is the latest person to be charged with taking part in the Jan. 6 insurrection at the U.S. Capitol.

A Palm Harbor rabbi is accused of taking part in the raid in the United States Capitol that interrupted congress and left five people, including a police officer dead.

Adam Johnson, the Florida man nicknamed "lectern guy" after he was allegedly photographed walking off with the speaker’s lectern during riots at the US Capitol, will be back in Federal court in the District of Columbia on Tuesday.

The smiling 'lectern guy' seen in a now-viral photo taken during this week’s invasion of the U.S. Capitol has been arrested in Pinellas County, records show.