SARASOTA, Fla. - A researcher who founded the Mote Marine Laboratory and Aquarium in Sarasota and passed away in 2015 will now be remembered on a newly unveiled stamp.

Dr. Eugenie Clark's research and work surrounded sharks and started as a one woman operation out of a shack in Cape Haze. Her work would eventually grow into Mote Marine Laboratory in 1955.

Dr. Michael Crosby, the president and CEO of Mote Marine Laboratory and Aquarium remembered his friend as the stamp was unveiled.

"Genie questioned the status quo and always made positive change, she influenced many who followed her and learned from her," said Crosby.

Clark's family, colleagues, and those she impacted gathered on what would have been her 100th birthday. Angela Curtis, the vice president of delivery for the United States Postal Service, said the stamp is an opportunity to promote Clark's work and generate interest in all the research she did. 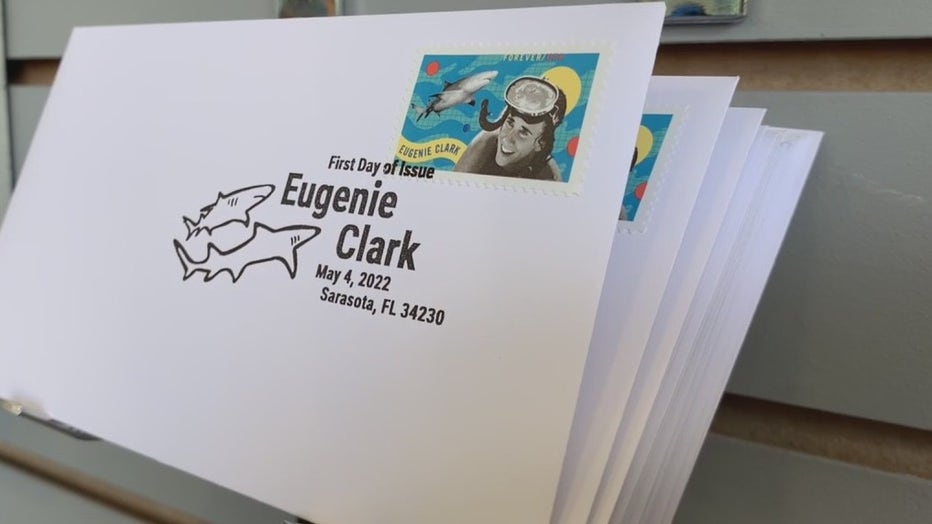 Clark's research discovered some sharks don't have to swim to continuously breathe.

"It is a very special honor to have a stamp in her name with her and her lemon shark which is why she became known as the shark lady," said her daughter Aya Konstantinou.

Her daughter said lemon sharks were among Clark's favorite. Lemon sharks helped her prove sharks have memory and are trainable.

"She did this pioneering research in the 1960s at the south end of Siesta Key, proving they had intelligence," said Konstantinou.

"She began to crack glass ceilings, but then really broke through them with her accomplishments," said Crosby.

Clark was captivated by marine animals after a childhood visit to the New York Aquarium. Her picture is now printed on 18 million stamps, as her legacy continues to inspire each new generation.

"She is a role model for much more than just women or minorities, if you look at the sum total of her life. She is a great role model for everyone. Follow your passion take a lot of math," said Crosby.