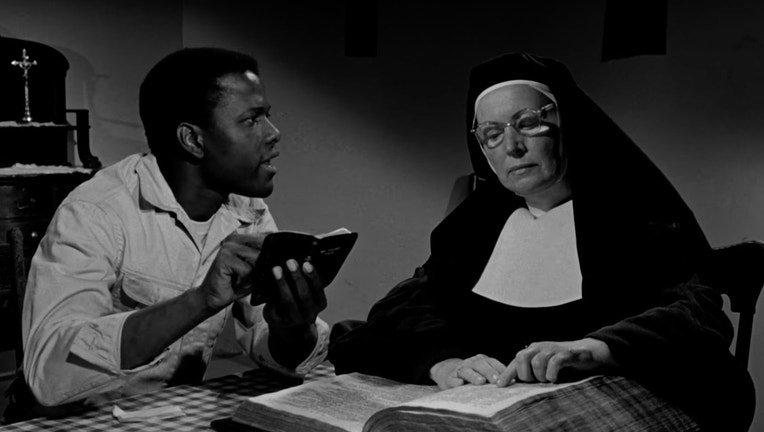 Sidney Poitier and Lilia Skala in "Lilies of the Field"

So says Mother Maria (Lilia Skala) in "Lilies of the Field" when Sidney Poitier’s Homer Smith first drives up to the struggling Arizona farm she runs with a group of fellow East German nuns.

WATCH: "Lilies of the Field", streaming for free on Tubi

The lighthearted, almost sitcom-y culture clash that follows is not what you might expect from the film that won Poitier the Academy Award for Best Actor — making him the first Black man to take home an Oscar.

But Poitier — who died at age 94 last week — was an agile actor who could nimbly shift between drama and comedy. And both qualities are on display in 1963’s "Lilies of the Field."

Released eight years after Poitier’s breakout role as a rebellious high schooler in 1955’s "Blackboard Jungle" and 34 years before he gave his final feature film performance in 1997’s "The Jackal," "Lilies of the Field" is a curious product of its time.

Based on William Edmund Barrett’s 1962 novel, the movie stars Poitier as a nomadic jack-of-all-trades who winds up getting coerced into staying on as a full-time handyman for the impoverished nuns. It’s a premise that threatens to veer into "Get Out" territory at times, as the nuns keep assigning Homer new jobs while withholding his pay. But Poitier and Skala play up the lighter side of the material as Homer and Mother Maria go head-to-head in a battle of iron wills.

When a local priest tells Homer that Mother Maria believes God sent him to her, Homer deadpans, "No, I don't think he sent a Black Baptist to a Catholic nun."

Yet Homer soon becomes endeared to his devout employers, particularly during delightful "Sister Act"-esque sequences where he leads the upright European nuns in a rousing gospel arrangement of "Amen." Homer also finds a personal cause when he learns these German women and their Mexican American neighbors attend mass out of the back of a car because there’s no church nearby. They need a proper chapel, and aimless but talented Homer might be just the man to build it for them.

"Lilies of the Field" uses its comedic tone to dig into topics that might otherwise have been deemed too controversial for mainstream audiences in 1963. Race and religion are, of course, the most obvious social issues that "Lilies of the Field" explores, but it’s also interested in gender, politics, purpose and power.

When a white construction contractor refers to Homer as "boy," Homer calls him "boy" right back. It’s a prelude to the even more boundary pushing cinematic moment Poitier would deliver in 1967’s "In the Heat of the Night," when his character slaps back against a white man who slaps him first.

As in Poitier’s trailblazing 1967 interracial romance "Guess Who's Coming to Dinner," however, there's a tension that exists in "Lilies of the Field." While the film pushes boundaries in some ways, in others it delivers a nonthreatening vision of unity for mainstream audiences.

Still, what stands out most is Poitier’s absolute ease on screen. He projects incredible charisma as a suave, self-possessed but still fallible drifter. Though Homer is a natural leader, he’s also wary of being responsible to anything or anyone, a throughline the film explores in an appreciably understated way.

"Lilies of the Field" allows Poitier to play all different sides of himself — funny, frustrated, sensitive, stubborn, charismatic, introspective and caring. Like so many of Poitier’s best performances, Homer is a man who’s fully comfortable in his own skin. And that makes "Lilies of the Field" a compelling watch, even with all the nunsense.

You can stream this classic, for free, on Tubi.

Other Sidney Poitier performances streaming for free on Tubi

Paris Blues (1961): Sidney Poitier and Paul Newman star as two expatriate musicians who make their living in the City of Lights, but consider giving it all up when they meet two American women (Diahann Carroll and Joanne Woodward) who are visiting Paris on vacation. TV-PG. 98 minutes. Dir: Martin Ritt. Also featuring: Louis Armstrong.

Duel at Diablo (1966): In his first ever Western, Sidney Poitier plays a horse trainer who teams up with a frontier scout (James Garner) who’s looking to avenge his wife — a Comanche woman who was murdered by a white man. Rated TV-PG. 103 minutes. Dir: Ralph Nelson. Also featuring: Bibi Anderson, Bill Travers.

They Call Me Mister Tibbs! (1970): Sidney Poitier returns as Detective Virgil Tibbs in this sequel to "In The Heat of the Night." Now working as a lieutenant with the San Francisco police, Tibbs must investigate another mysterious murder. Rated R. 108 minutes. Dir: Gordon Douglas. Also featuring: Martin Landau, Barbara McNair.