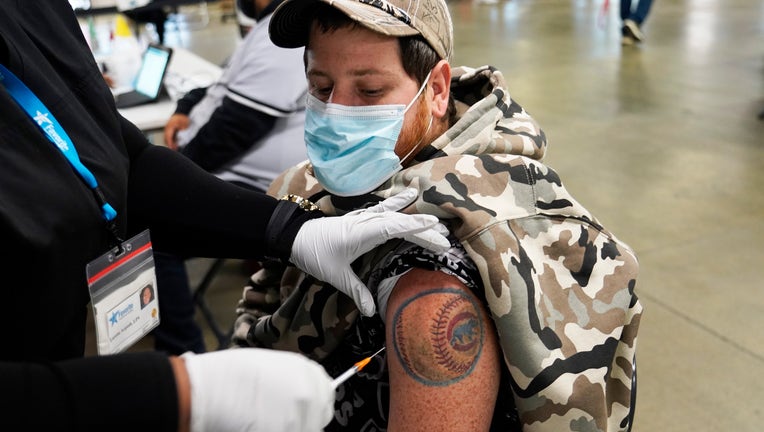 Kevin Hensley is given the J&J COVID vaccine in coordination with the Cook County Health Dept. and the Chicago White Sox. Recipients were given a $25 card for discounts on concessions before Game One of a doubleheader at Guaranteed Rate Field on

WASHINGTON - The pace of COVID-19 vaccinations in the U.S. has slowed in recent weeks, pushing President Joe Biden’s goal of having 70% of adult Americans receive their first dose by July 4 further out of reach.

According to the U.S. Centers for Disease Control and Prevention, 63.5% of Americans 18 years and older have received at least one dose of the COVID-19 vaccine.

However, the daily vaccination rate continues to trend downward.

According to the Washington Post, 13 states mostly on the east and west coasts have achieved Biden’s goal with an additional 15 states on track to reach it by Independence Day. However, other states lag behind such as Alabama, where the state had just four people per 10,000 residents get vaccinated last week, according to the outlet.

CDC Director Rochelle Walensky urged teens and adolescents to get vaccinated against COVID-19, pointing to high hospitalizations among this group in March and April.

Another challenge with the vaccine rollout is vaccine hesitancy. A new Gallup poll showed that 78% of unvaccinated Americans say they don’t plan to ever get the shot.

Dangling everything from sports tickets to a free beer, Biden is looking for that extra something — anything — that will get people to roll up their sleeves for COVID-19 shots.

Last week, he announced a "month of action" to urge more Americans to get vaccinated before the July 4 holiday, including an early summer sprint of incentives and a slew of new steps to ease barriers and make getting shots more appealing to those who haven’t received them.

"The more people we get vaccinated, the more success we’re going to have in the fight against this virus," Biden said from the White House. He predicted that with more vaccinations, America will soon experience "a summer of freedom, a summer of joy, a summer of get togethers and celebrations. An All-American summer."

Biden’s plan will continue to use public and private-sector partnerships, mirroring the "whole of government" effort he deployed to make vaccines more widely available after he took office. The president said he was "pulling out all the stops" to drive up the vaccination rate.

"Get a shot and have a beer," Biden said, advertising the promotion even though he himself refrains from drinking alcohol.

Additionally, the White House is partnering with early childhood centers such as KinderCare, Learning Care Group, Bright Horizons and more than 500 YMCAs to provide free childcare coverage for Americans looking for shots or needing assistance while recovering from side effects.

Other new incentives include a $2 million commitment from DoorDash to provide gift cards to community health centers to be used to drive people to get vaccinated. CVS launched a sweepstakes with prizes including free cruises and Super Bowl tickets. Major League Baseball will host on-site vaccine clinics and ticket giveaways at games. And Kroger will give $1 million to a vaccinated person each week this month and dozens of people free groceries for the year.

Biden will also announce that he is assigning Vice President Kamala Harris to lead a "We Can Do This" vaccination tour to encourage shots. It will include first lady Jill Biden, second gentleman Doug Emhoff and Cabinet officials. Harris’ travel will be focused on the South, where vaccination rates are among the lowest in the country, while other officials will travel to areas of the Midwest with below average rates.