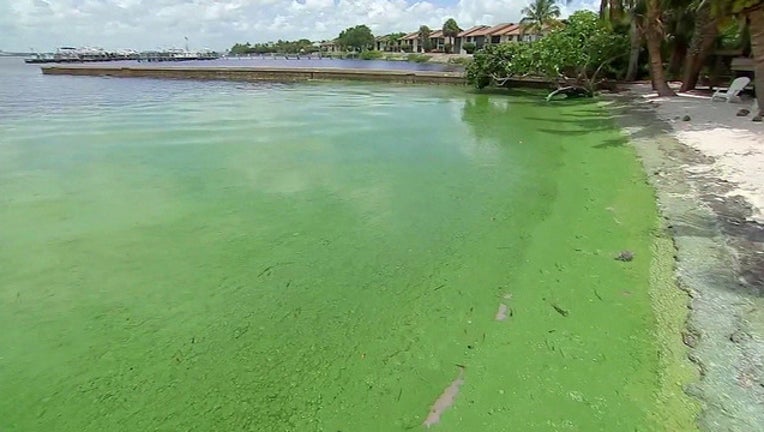 TALLAHASSEE, Fla. (NSF) - Experts looking into toxic algae outbreaks that have exploded in state waterways want to know if anyone has a proven, innovative cleanup strategy that can be used.

And they want to know quickly.

The Florida Department of Environmental Protection is formally accepting information through July 15 on ways to prevent, combat or clean up harmful algal blooms in freshwater bodies and estuaries.

Thomas Frazer, Florida’s chief science officer, said Monday during a state Blue-Green Algae Task Force meeting in Fort Myers that he and other officials at the state department have already been fielding calls from people with ideas about fighting the algae.

“I wouldn’t want to limit the people who have expressed interest,” Frazer said. “There are times that people may not have a ton of preliminary data … but sometimes there are really good ideas.”

The better ideas will go before the task force at its Aug. 1 meeting, Frazer said.

Gov. Ron DeSantis issued an executive order in January to create the task force in response to outbreaks of toxic algae and red tide across the state last year.

The source of outbreaks in Florida and the Gulf of Mexico is blooms of a single-celled organism called Karenia brevis algae, which produces toxins that kill fish, birds, sea turtles, manatees and dolphins and can cause shellfish poisoning in humans.

The problems particularly drew attention in Southeast and Southwest Florida, as algae plagued water bodies such as the St. Lucie and Caloosahatchee rivers and red tide caused fish kills.

Frazer said the task force won’t be asked to pick proposals or vendors but to determine if projects have merit to move forward for potential state grant funding.

Frazer said officials are open to “all different kinds of potential solutions,” which could mean chemical, biological, mechanical ideas or any combination of those methods.

As part of a request for information, more than 35 questions are asked, from potential environmental impacts to the size of water bodies that could be effectively treated.

“With regard to cleanup, specifically, we want to make sure the technology provides near-term ecological and human health relief,” Frazer said.

Some people making proposals could be asked to appear before the task force to answer questions about their proposals.

Frazer said additional people may even be needed to review the viability of proposals.

Part of the grant-making process will be determining who is behind proposals because some information could come from more than one person.

The focus of the task force is Lake Okeechobee and waters on both sides of the lake, but the state is also looking at possible algae impacts as far north as the St. Johns River.

As part of the $90.98 billion budget for the fiscal year that began on Monday, $4 million is slated to go to expanding “statewide water quality analytics for the nutrient over-enrichment analytics assessment and water quality public information portal.”

Separately, a new law (SB 1552) provides $3 million a year for the next five years to the Florida Red Tide Mitigation and Technology Development Initiative to research the causes and impacts of red tide.

You can submit your clean-up ideas HERE.