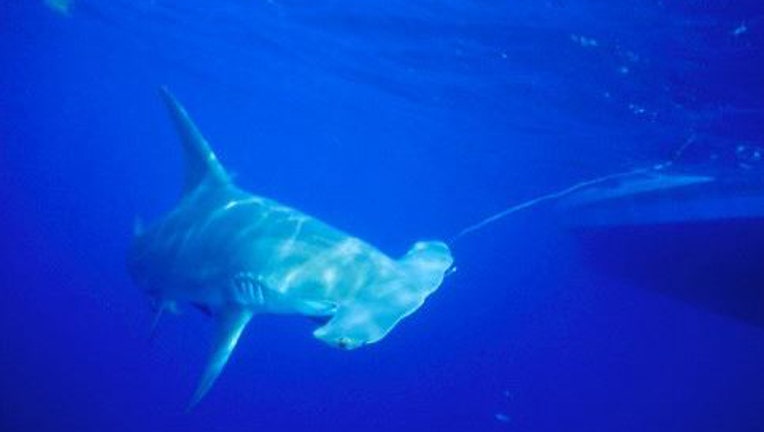 MIAMI, Fla. - It’s long been known that the waters off Miami are a shark hotspot but scientists have just discovered they’re also critical habitat for one endangered and iconic species — the great hammerhead shark. A new study found that a small section of Biscayne Bay appears to be a previously unknown hammerhead "nursery," the first of its kind identified on the entire American Atlantic coast.

Catherine Macdonald, a lecturer at the Rosenstiel School of Marine and Atmospheric Science at the University of Miami, said she had not set out to study hammerheads. "We were doing research on another species in Biscayne Bay," said Macdonald, "and just happened to catch a juvenile hammerhead. Then another. And then another. And after the third or fourth we realized, this isn’t a coincidence."

Macdonald and her team quickly shifted focus to the hammerhead pups and this week published their findings in the journal, Conservation Science and Practice.

The study focused on just a one-square mile nursery site in north-central Biscayne Bay, an area between Key Biscayne and Matheson Hammock Park on the mainland that is heavily traveled by boaters It suggests that protecting Biscayne Bay may be critical to helping a species at risk from habitat loss and fishing pressure.

Great hammerheads, the largest kind of hammerhead shark, are one of the most familiar and fiercest carnivores to swim the Florida coastline. They are apex predators, which means nothing hunts them, while they hunt what they please.

A hammerhead’s favorite snack is rays, and they can sometimes be seen scouring the grass flats of Biscayne Bay waving their T-shaped heads like metal detectors to pick up electrical signals from buried rays before attacking them. Hammerheads often eat other sharks too, such as black-tips.

Great hammerheads, which can live to be over 30 years old, have a mysterious childhood, likely growing up in habitat that is safe from predators and has an abundance of food, which marine biologists call a nursery.

As the sharks get "more formidable and street wise", said Macdonald, they begin to venture further, becoming fully migratory as adults. By staying on the move, adults can expand the places they hunt prey from seagrass beds to reefs and open ocean.

Because they can rove hundreds of miles per year, efforts to conserve them can be tricky, requiring multinational approaches. The trend lines have not been good, however, with the International Union for Conservation of Nature (IUCN) listing them as critically endangered in 2019.

While great hammerhead juveniles have been occasionally sighted in the Florida Keys, along the Florida Gulf coast, and off the Georgia coast, finding a large group of young hammerheads in one place is unprecedented, according to the study.

The surprise presence of so many juvenile hammerheads quickly reshaped the UM study plan that began in 2018, said Macdonald, who is also director of a marine science education company called Field School.

"Sometimes you have this study design," said Macdonald, "and nothing goes as expected. So you do something else and new scientific knowledge falls in your lap. That’s what happened with this study."

To officially call the area a shark nursery, Macdonald and her team had three scientific checkboxes to address. They had to determine if there were more juveniles there than elsewhere, if juveniles remained there for a long time and if juveniles were present year after year.

To answer those questions, Macdonald and her team captured nine pups and tagged them with acoustic trackers. Any time a tagged pup swam near one of the many receiver-equipped buoys in the bay — placed by the Florida Atlantic Coast Telemetry (FACT) network — the receivers pinged the shark’s location and scientists could look at their movement patterns. 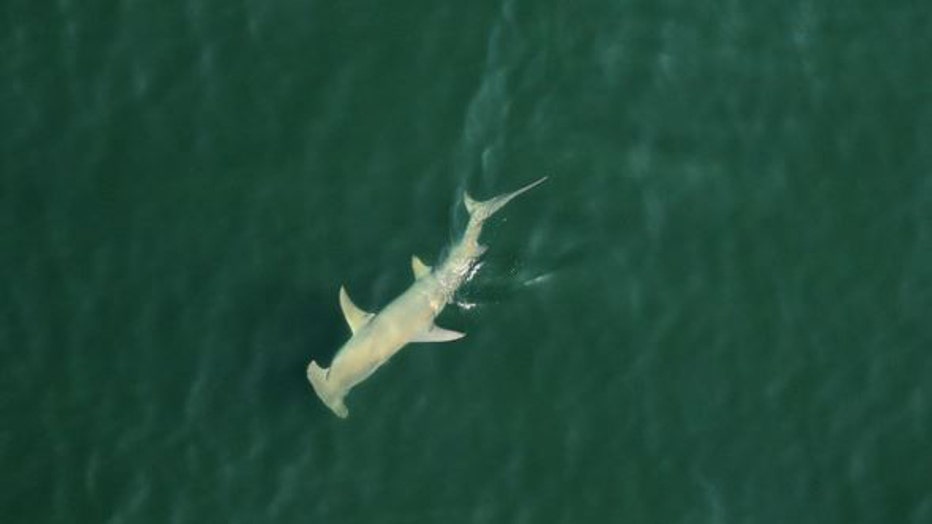 The shark movements in the bay checked off the three nursery requirements. Macdonald, however, wants to expand the study and tag more sharks to more confidently determine how many juveniles might be here and how far out the Biscayne Bay nursery extends.

The study area isn’t some quiet, isolated spot in the bay. It’s about four miles from Miami’s downtown and just north of the border of Biscayne National Park, an area filled every weekend with buzzing powerboats and water bikes along with some anglers. One of the hammerheads Macdonald’s team caught appeared to have boat-collision injuries. Others had hooks lodged in their mouths.

While hammerheads are illegal to harvest due to their endangered status, the nursery area is open to commercial and recreational fishing and it is not uncommon for them to be unintentionally caught, which can lethally stress them.

"If you accidentally catch a hammerhead," said Macdonald, "the best thing you can do for them is minimize fight time and handling time."

To ensure the research team could capture hammerheads without overstressing them, they learned to operate like a NASCAR pit stop. Once a hooked shark is hauled out, the crew rushed in. One person would funnel seawater into the hammerhead’s mouth through a large pipe sucking up ocean water so the shark could breathe. Others drew blood, injected a tag, took muscle and fin samples, and measured the shark’s length. Then the shark was returned to the bay.

The samples are being shared with geneticists and biochemists to learn as much as they can with each shark capture. Even the shark length numbers caught Macdonald’s eye as one recaptured pup had grown almost ten inches in just five months — a moderately faster growth rate than previous studies reported.

"It got me excited to think, is our population different?" said Macdonald. "Is there different resource availability in Biscayne Bay? Is there seasonal growth? There’s all sorts of new questions to answer."

Macdonald said the findings underline the importance of protecting Biscayne Bay, a body of water plagued by algae blooms, overfishing and other troubles. Miami-Dade has launched an effort to reverse declines.

"If you care about these very cute apex predators," said Macdonald, "you should care about the health of our coastal waters, our fish populations, our seagrass beds...We have to increase ecosystem resilience. We can’t pick what parts of nature we like and don’t. It’s all one package."

Macdonald is continuing to research great hammerheads plus other coastal sharks. Pups of the scalloped hammerhead, a species listed as critically endangered this year, were also found in the region, implying multiple species might use Biscayne Bay as a nursery.

"We find coastal sharks all around Miami, along seawalls, in marinas," Macdonald said. "They can do okay alongside humans, if we try and make it possible."