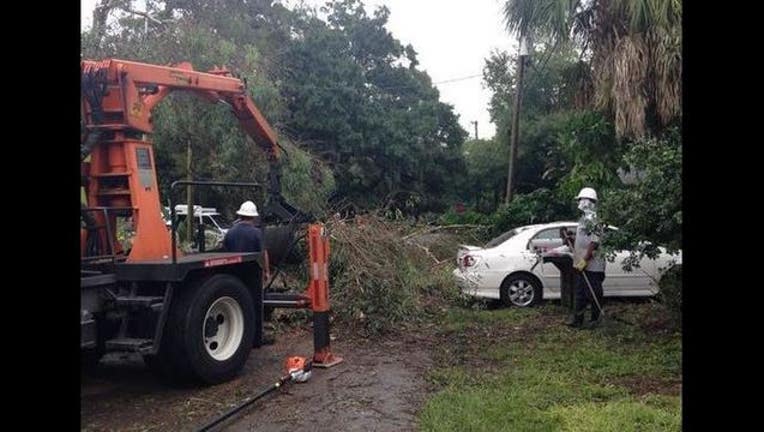 Though much of South Tampa is drying out, the cleanup is still underway. From fallen trees to backyards underwater, neighbors are trying to get back to normal.

After a three-week downpour, the sound of water tricking into the drains is music to the ears of people on West Ballast Point Boulevard. It means the flood water is going somewhere other than their yards.

"This is supposed to be a driveway but it's more of a lily pond with tad poles and lots of dog excrement and sewage. It's lovely," said homeowner Leah Williams.

Williams installed a wooden dock in her backyard as a decoration but boy, is it coming in handy these days.

"It's like living in an aquarium," Williams explained. "If you walk down the dock, you can actually see little tadpoles everywhere because there are so many frogs."

If you have a big vehicle suited for cruising the floodwaters, good for you. Not good for these homeowners.

"I think they were just washing the bottom of their trucks off," Mark Dempsey said.

Fed up with speeding drivers sending water toward their already soggy homes, neighbors took matters into their own hands. They blocked off their street to any non-residents.

"Five inch waves rolling into the house," Demspey added. "We tried to locate cones from friends and whatever and I had the caution tape which really worked today."

A road blockage on a much drier Swann Avenue was a lesson to drivers. No matter how fancy your Maserati is, it's no match for rising water.

Unfortunately, for one this driver on West Tyson Avenue, keeping his wheels on the driveway didn't spare him from a falling tree.

"I think it's totaled," Dominic Sala said looking at his smashed car. "Everyone is saying the soil was so saturated, it fell over. Such a heavy tree. It's massive."

City of Tampa workers sawed off the extra branches and removed the tree.

While the rain may have slowed, the less-than-pure water is still here. Some neighbors joked, as they trekked through the streets that, "you've got to do the Ballast Point Shuffle."