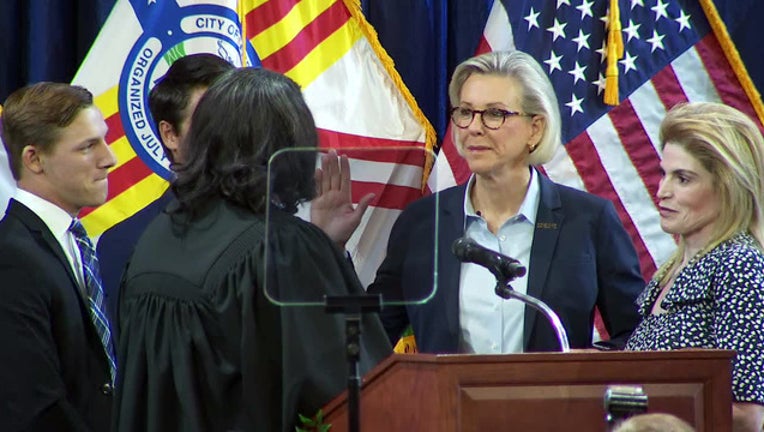 TAMPA, Fla. (FOX 13) - The city of Tampa has a new mayor. Former police chief Jane Castor took over the reins from bob Buckhorn this morning.

Following her landslide -- and landmark -- victory over businessman David Straz, Castor said this sends a “resounding message to the nation that Tampa celebrates its diversity and lifts everyone up in a positive way."

She’s referring to being Tampa’s first ever openly gay mayor and only the 37th in the country.

If her campaign is any indication, she will first focus on attempting to improve Tampa's infrastructure, transportation and economy — those were main points of her campaign.

During Wednesday morning’s ceremony at Armature Works, she discussed how exciting this is for her and for the city.

“Tampa is a city whose future remains bright because of our greatest assets, our citizens who call Tampa home. Our hard work, hopes, and dreams are the narrative that shapes Tampa’s story each and every day. And the values that we share – diversity, equality, and opportunity – are the same values that have guided my career from the first day as a beat cop to my last day as a chief of police. And it is those values that will guide me as your mayor.”

Castor is the city‘s former police chief and spent decades at the Tampa Police Department. She won in a landslide over Straz after the general election came down to a runoff between the two candidates.

Castor easily secured the win, earning more than 70% of the votes.