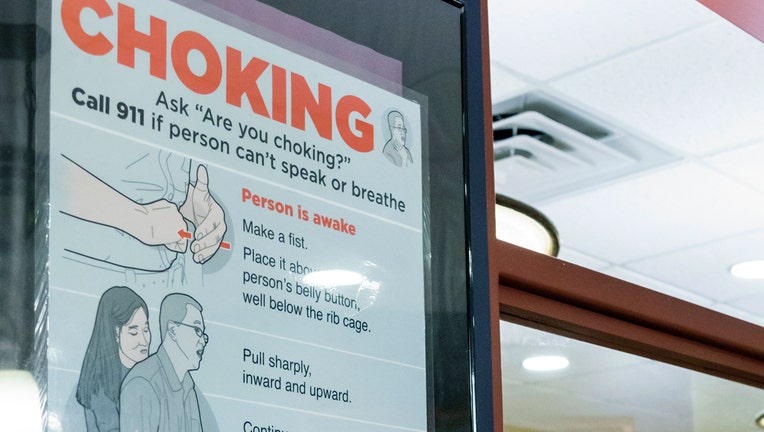 A first-aid procedure poster in the International House of Pancakes. (Photo by: Jeffrey Greenberg/Universal Images Group via Getty Images)

The 14-year-old student at Central High School in Brooksville was taken to the hospital and is expected to make a full recovery, according to the Hernando County Sheriff's Office.

It happened in the lunchroom Friday just before 11 a.m. The student began choking and school staff rushed to help.

The assistant principal was performing the Heimlich maneuver when the school resource officer, Deputy Julio Escoda, called for EMS help and then took over to help rescue the student.

Just weeks after an 8-year-old girl learned the Heimlich maneuver from her mom, who is a Manatee County paramedic, she was able to save her choking stepdad and the whole thing was caught on camera.

The sheriff's office said Deputy Escoda continued performing the Heimlich maneuver for several minutes and then the assistant principal took back over.

After a few more minutes, Deputy Escoda once again took over performing the Heimlich maneuver and was finally able to dislodge a grape from the student's airway.

Hernando County Fire EMS crews arrived a short time later to evaluate the student. They took him to the hospital due to the length of time the student was without air, which the sheriff's office said was "more than 10 minutes."

The student is expected to make a full recovery.