SARASOTA, Fla. - A few dozen of former President Donald Trump's supporters gathered in Sarasota Saturday to be the first through the gates at Saturday's rally.

It will be his first rally in Florida since leaving office.

The crowd made the Sarasota County Fairgrounds look more like a camping ground Friday night.

"If you're prepared., it's a fun experience. The tent takes the rain. You just kick it right off. Not a big deal," Trump supporter Alicia Lurye said of her camping experience.

Lurye traveled from West Palm Beach and was among one of the first people at the fairgrounds, around 8 o'clock Friday morning.

"I want to be here to support the president that supports all of us, day in and day out, tirelessly, to make sure or to attempt to fix things in this country that are broken and have a voice, a loud voice for those of us who don't feel like we're being heard," Lurye said. 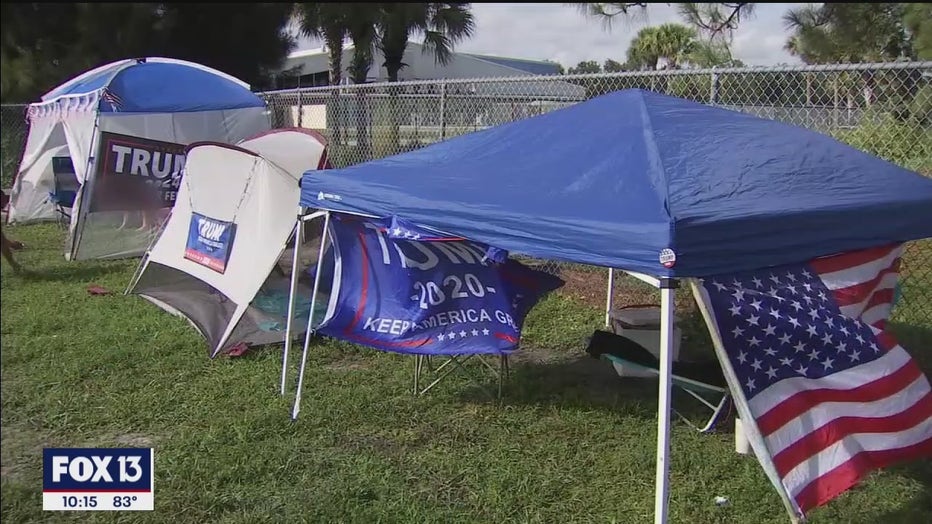 Friday, event officials spent the day putting together outdoor seating and the stage where Trump is set take the podium around 8 p.m. Saturday. Following his remarks, there will be a fireworks show to celebrate Independence Day.

It's become a tradition for Sarasota resident Crystal Beauchemin. This will be her third Fourth of July spent with Trump and says she was determined not to miss it.

"Every other time I've had to stay back, but we are in my backyard this time and I could go sleep in my king size bed, but I am going to stay right here and I am going to make sure I am at that door and I'm getting in there," she said.