A South Carolina man caught an alligator while out fishing in a saltwater marsh.

MURRELLS INLET, S.C. - One unsuspecting fisherman got quite a surprise when he hooked an alligator while out in a saltwater marsh in South Carolina.

Captain Robert Birchmeier, of Pawleys Island Beach to Creek Guide Service, was fishing for flounder in Murrell’s Inlet on May 20 when he hooked something big. Video shared by Birchmeier shows him slowly reeling in what he thought was a stingray, but the captain got a much more surprising catch.

"I think I got me a stingray," Birchmeier said just seconds before an alligator surfaced. "Oh boy, that’s not a stingray."

The alligator thrashes about, after which Birchmeier said, "Surprise, surprise." 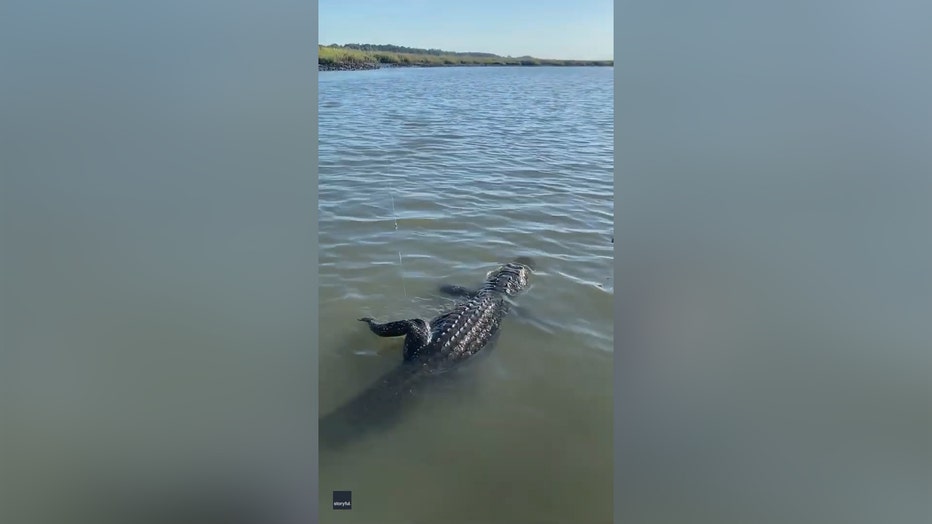 Birchmeier said the way the alligator was moving after he caught it, felt like a stingray.

"It felt like a stingray. It would run and then lay flat on the bottom, so that’s what I thought," Birchmeier told FOX TV Stations. "I was not thinking alligator by any stretch of the imagination."

A few more seconds later, Birchmeier showed that the fishing line was caught on the alligator's leg and the reptile seemed to be floating upside down in the water.

Birchmeier was able to get the gator off the hook and released it safely, but this isn’t the first time he’s seen these large reptiles swimming in the saltwater marsh.

"I’ve got about 500 trips out there and a handful of times you see a small gator out there, it’s not rare but it’s not common," Birchmeier said.