TAMPA, Fla. - The story started out as a viral tweet thread, almost too shocking to be true – and some details are not. It's a tale of strip clubs, violence, and eventual sex trafficking that allegedly took place right here in Tampa.

Wednesday, ‘Zola’ hit movie theaters nationwide. Though the movie is portrayed as comedic, some local sex trafficking survivors find the storyline to be incredibly dangerous.

"You want to hear a story about how me and this b---- fell out? It's kind of long but it's full of suspense," the character Zola says in the movie's trailer. Those words are the first of 148 tweets by @_zolarmoon that sparked a social media frenzy in 2015.

Shot in and around Tampa, you'll recognize some local landmarks throughout the movie, such as the Sunshine Skyway, the old Ranch House Grill in South Tampa, and the Royal Palm Motel on Nebraska Avenue in Seminole Heights.

‘Zola’ tells the story of a Michigan waitress who met an exotic dancer and their trip to Florida filled with stripping, violence, betrayal, kidnapping, and for Zola, a trap in sex trafficking.

"I am heated over this," agreed Christa Hernandez.

Rose was pimped out by her own father as a teen. Hernandez was trapped in sex trafficking for 20 years. Like the movie, she was befriended by another woman and brought into the dark world.

"I can't tell you the amount of times I've had customers put guns to my head," Hernandez said. "I've been punched."

Though they don't encourage it, they want anyone who chooses to see ‘Zola’ to keep some things in mind.

And it's a serious problem in Florida, which ranks third in the U.S. for the crime.

"If there was any kind of force, fraud, coercion, or control, you've rolled into the world of trafficking," Rose said. 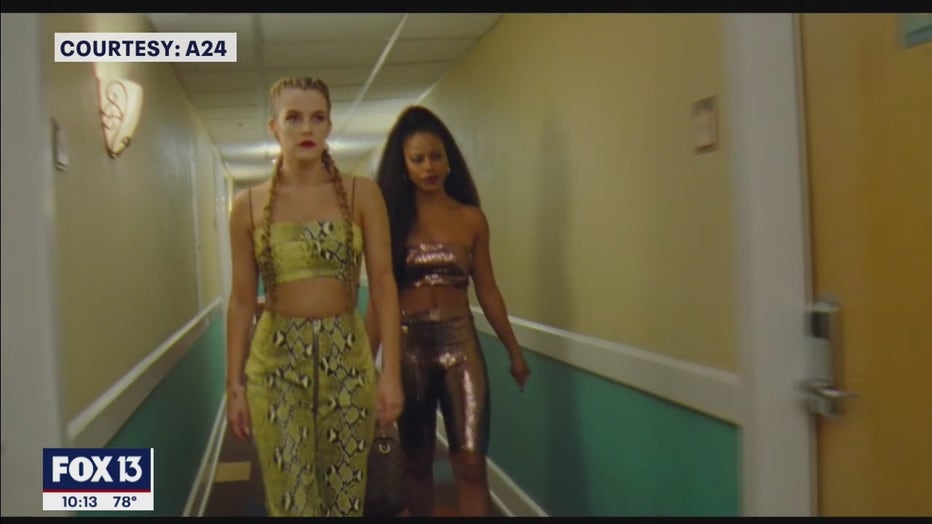 The real Zola, Aziah Wells King, said she didn't want her story watered down for theaters. She asked the stars of the film what they learned while acting out her experience.

"Agency, speaking up for myself, asserting myself, being comfortable in my body," said Taylour Paige, who played Zola.

"Her confidence and in writing and telling her story, she has this sort of fearless quality in her writing," said Riley Keough who played Stefani.

Hernandez said she actually hopes to reach out to the real Zola to talk about the trauma of the experience and perhaps, provide support.

Hernandez is the founder and executive director of Loving You Where You Are At, a survivor-led outreach to women in the commercial sex industry as well as victims of Human Trafficking. You can learn more about her work at https://lovingyouwhereyouareat.com/.

Rose is the founder and executive director of Victims2Survivors-US, a survivor-led non-profit organization focused on eradicating human trafficking and "Filling The Gap" by providing supportive survivor services. You can reach her at https://victims2survivorsus.org/.