TAMPA, Fla. - A Tampa father and husband is finally back home after eight months in the hospital and a long-term care facility, where he had a long road recovering from COVID-19.

Leida Daneman welcomed home her husband, Stephen, last Friday. It was an emotional moment for their family and a story of perseverance.

"Just seeing him getting out of the car and on the wheelchair and coming inside was like, I just wanted to cry. But I held back, of course," said Leida.

Stephen now needs some help moving around, and he keeps an eye on his oxygen levels. But he said that’s a big improvement.

"By the grace of God, I'm here before you today because of the support of all my friends and family," said Stephen.

His experience with COVID-19 started the day after Thanksgiving last year. The 68-year-old said he couldn’t breathe, so his wife took him to the hospital.

"The first thing I do remember is the person who admitted me started checking all my vitals and everything like that. He just said, ’Calm down. You're in the right place,’" said Stephen.

His condition spiraled, something his family never expected. He ended up on a ventilator, dialysis and then went into a 10-day coma before waking up on December 31. 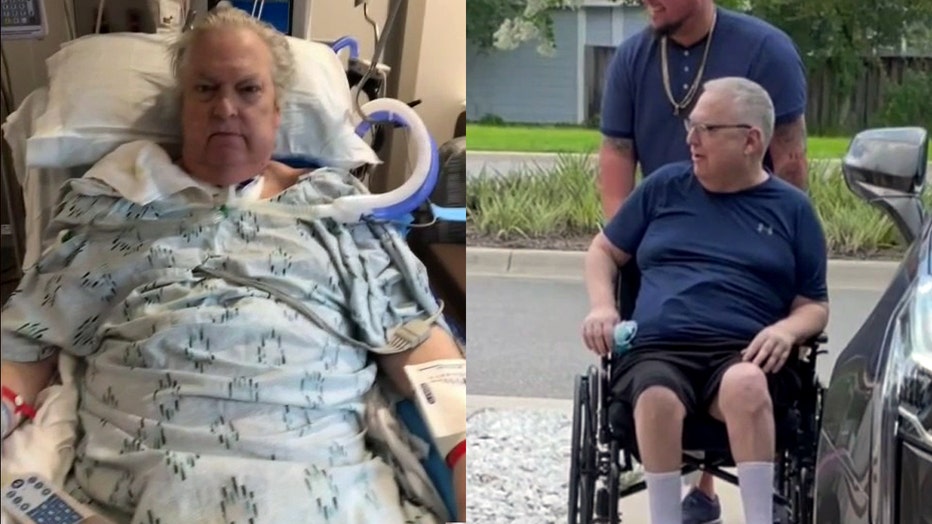 "It was the worst December of my life and our sons," his wife said.

Stephen said he was on death’s door, but his family brought him back.

He said his doctors and caregivers really helped him get better, teaching him to talk, hear and move again.

"He's a strong person. He fought and we fought for him, so he can live and be with us," said Leida.

After such a severe experience, Stephen said he was unsure about taking the vaccine, so he called his doctor.

"He said, 'Steve, if what you've gone through… if you get it again… it could be even worse.' And I said, ’Fine, that was enough for me," said Stephen. "My feeling about that is, I want to do whatever I can to protect myself as well as my family from anybody ever having to do with this, this nasty disease. It's not anything I would wish on anybody. It's wasn't a pleasant journey."

Stephen said he gets his second shot in a few days. With the worst behind him, Stephen and his wife of 41 years sit together now and make plans for the future.

"You know, life is too short, and you've got to take it and run with it," said Leida.

The Danemans said they are so thankful for the doctors and caregivers who took care of Stephen while he was in the hospital and care facility. Stephen said he has much more physical therapy ahead of him, but his goal is to be back to normal by New Year’s Day.