TAMPA, Fla. - Five weeks ago, at 49 years old, Hector Fernandez was admitted to the coronary intensive care unit at Tampa General Hospital and has been on heart pumps ever since.

Fernandez was diagnosed with a genetic heart condition seven years ago and doctors said it would eventually progress to the point he would need a heart transplant.

Unfortunately, that time has come. 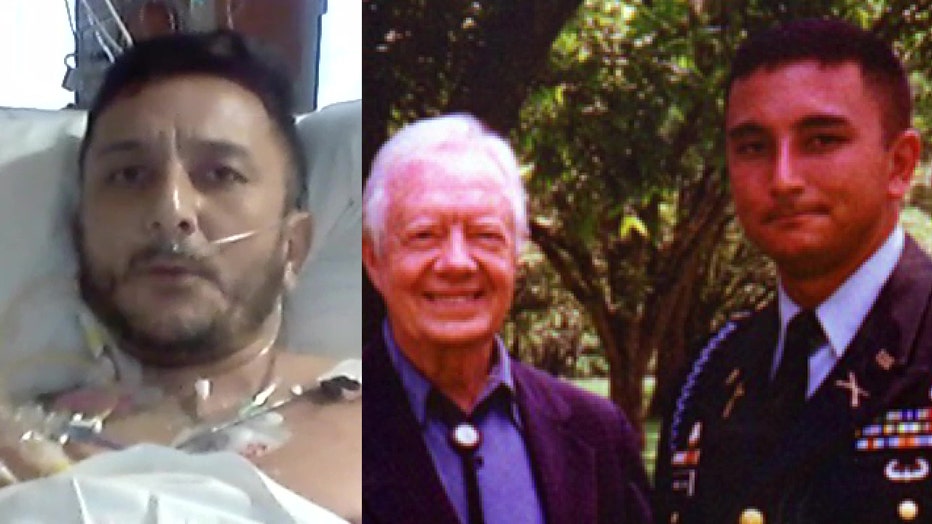 His wife Amy has been by his side, but COVID-19 restrictions keep him from seeing his four children in person.

"I’m not going to be able to go home until I get a transplant," Fernandez said.

Fernandez is a veteran of the Army. He enlisted in 1994 and was stationed at Fort Benning. After a year of training, he was stationed in Germany and then was deployed to Bosnia on a peace-keeping mission.

After Bosina, he went to Macedonia for a UN mission, then Kosovo in the late 90s. Fernandez also did two tours in Afghanistan.

"This is by far the hardest challenge I have done, being isolated and away from home and my family," Fernandez said. "I’m able to do it because of the nurses and the doctors here at Tampa General who have really done their best to keep my emotions and my attitude up and strong."

Memorial guitar for veterans, by a veteran

A Tampa guitar instructor who designs incredible hand-made guitars has been working on an extra special project. He's building a custom guitar for one of his students who lost two brothers in Afghanistan. It's been an emotional journey as he crafts this musical memorial.

To get out of the hospital and back with his family, he has to get a transplant. However, that comes with another sacrifice that someone else has to make, leaving him with a mental burden.

"I can’t pray for it because for me to get a heart would mean another family goes through a tragedy, another individual to lose his life so mine could be saved, and all I can do is sit here and take it day by day and if one comes, and there could be some good coming out of somebody’s tragedy, then I hope to be worth it and to live the best life I can do after that," Fernandez said.

He says he was the primary source of income for his family, adding to his concerns.

The Fernandez family hopes for donations to help pay for Hector's medical bills.

A GoFundMe account has been established to help the family at https://www.gofundme.com/f/father-and-veteran-in-need-of-heart-transplant.