Woman on mission to thank officers

TAMPA, Fla. - Aja Anderson took on a very ambitious project starting in mid-June, where she wrote a poem, put it on a special postcard, and has been sending it to every single police department and sheriff's office in the United States.

“I was paying attention to what was going on with the police and I felt like they need to be acknowledged because, sure, there’s a couple of bad apples, but the majority of them are just protecting and serving, and risking their lives for us,” said Anderson.

Her mission is to spread love; letting law enforcement agencies know they're supported during a time where there is a nationwide call to reform policing.

“Please support your police," Anderson said. "We need them. Reform them, help them, train them -- I agree. But support them.” 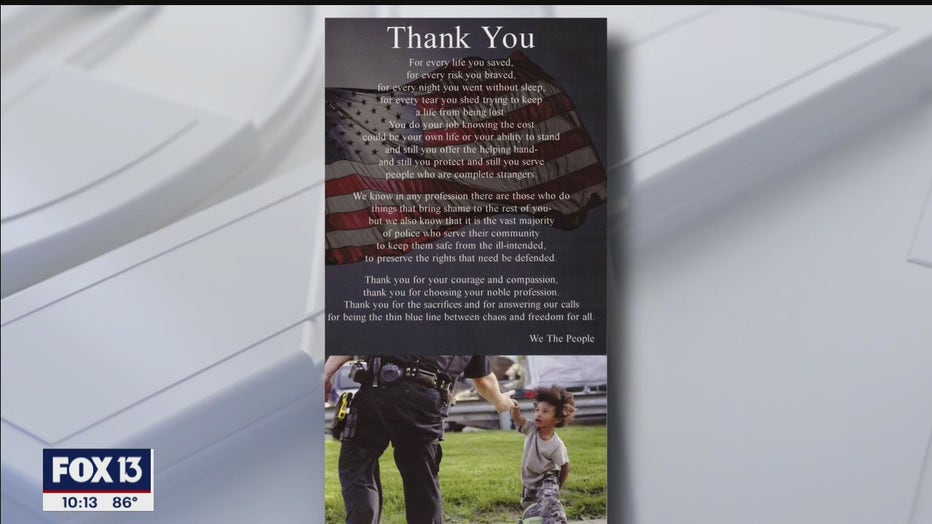 She says she has made and sent out about 25,000 postcards.

Anderson is also handing the postcards out individually to officers around Tampa and Hillsborough County.

She says she is also sending stacks of cards to her friends in other parts of the county so they can hand them out to their local law enforcement officers. Those cities include Miami, Los Angeles, Portland, Seattle, Minneapolis, New York, Chicago, Columbus, and Kansas City.

"We were having such a blast of negativity in this world right now, that to counter that, we need a blast of kindness,” she added.