TAMPA, Fla. - Football is Bruce Hills' favorite sport, and the kid from Tampa is not lacking in confidence. Bruce has yet to meet an on-field opponent he can't shut down.

"I can get pick-6s and score," Hills said. "I never got caught on or scored on."

Off the field is a different story. Bruce learned that the hard way back in October when he had a headache that just wouldn't go away.

"He was laying down that night and he didn't go to sleep," Bruce's father, Bruce, Jr. said. "I woke up and noticed he wasn't sleeping and I'm like, 'He don't cry like this.' So I'm like 'Mom, I'm going to take him to the hospital.'"

After a couple of weeks of tests in the hospital, it was determined that Bruce had a brain cyst.

"It was mind-blowing," his father said. "I could never wish that on anybody."

However, the first words out of Bruce's mouth were, ‘When can I play football?’ 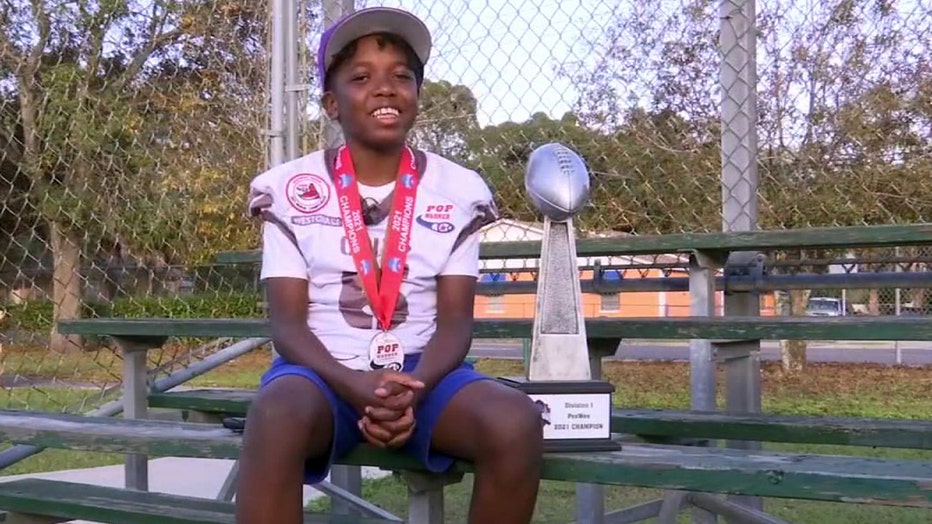 "I like playing football," Bruce said. "Football is my favorite sport."

Unfortunately, Bruce would have to sit out the remainder of the season.

His youth team, the Westchase Colts, in Tampa, made him an honorary captain. Though he couldn't play with his teammates, he was able to cheer them on from the sidelines – all the way to a national championship in Orlando.

"To see him smile out there, having fun, just being around his teammates, we had a ball," Bruce's father said.

If there's one thing that Bruce, Jr. wants Bruce, III to take from this: love life as much as you love football.

"We never know what can happen, so never take anything for granted."