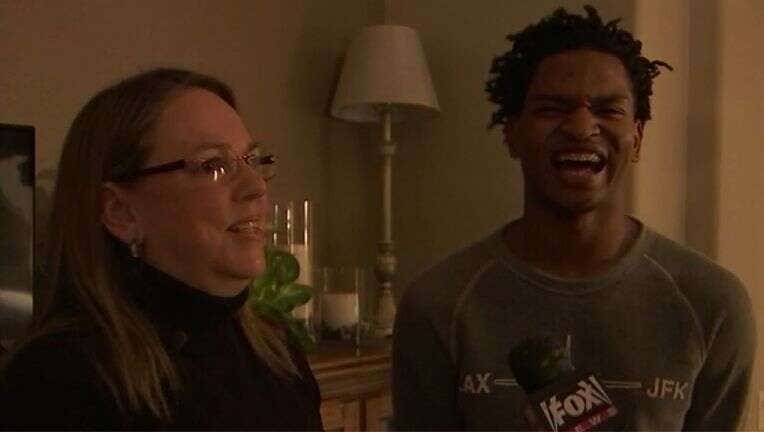 Four years after Wanda Dench became known on social media as the “Thanksgiving Grandma” -- because she accidentally invited a stranger to her Mesa, Ariz., home to celebrate the holiday -- the two shared a holiday meal for the fifth time Friday.

This year, however, Dench's dinner with her now honorary “grandson” Jamal Hinton came with one empty seat at the table. Dench, 63, lost her husband, Lonnie, to the coronavirus in March. The couple had been married for more than 40 years.

“It’s going to be different, my first Thanksgiving without him,” Dench said in an interview. “My husband was always right behind me, telling me how proud he was of Jamal and me for what we’ve done.”

In 2016, Dench texted a reminder to her real grandson for Thanksgiving dinner at her house at 3 p.m. But since he had changed his phone number the text went to Hinton instead. Despite the mistake, the ever hospitable Dench asked the then-17-year-old Hinton to join the family anyway.

“You not my grandma,” Hinton texted her back at the time. “Can I still get a plate though?”

“Of course you can,” Dench replied. “That’s what grandma’s do … feed every one.”

The feel-good story went viral and the two families have met for cranberry sauce and stuffing each year since.

RELATED: These are the major retailers closing for Thanksgiving Day this year

“After meeting her the first time I just knew, she’s another person, age is really just a number,” Hinton, now 21, has said of Dench, according to The New York Times. “It doesn’t matter, you can be friends with anybody, you can be family with anybody.”

Due to the risks of the pandemic, the two decided to celebrate the holiday a week early this year. They also had a smaller celebration than usual but made sure to leave a photo of Lonnie on the table to keep their “family” whole.