"You are wondering how long you can survive it," he remembers thinking.

Entering in 2009, at 53 years old, he would spend nine years in jail for battery.  All the while, his medical needs got more pronounced.

He saw medical staff three times a year for hernias and back problems, which led him to need visits at least once a month.

"From sitting in a cell so long and not being able to get out and do things, we have a tendency to freeze up," he said. 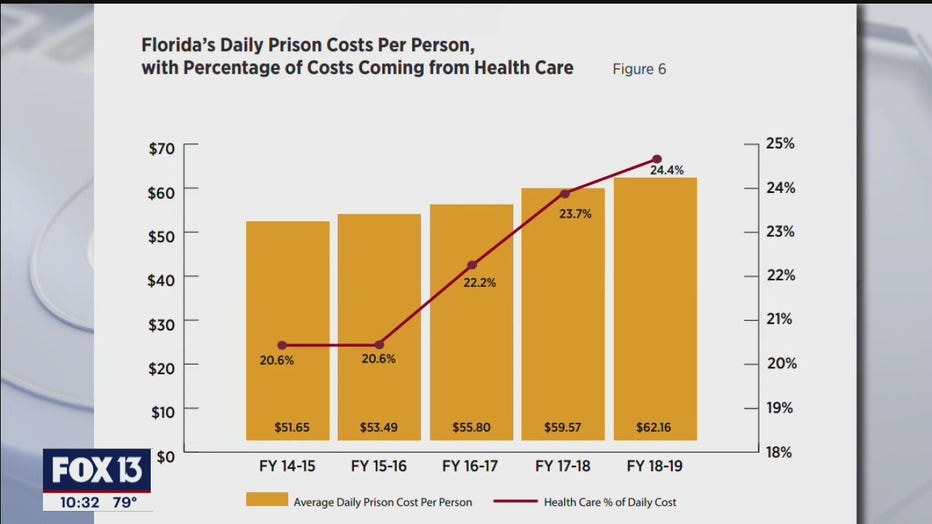 "Florida has one of the oldest prison populations in the country," said Carrie Boyd of the SPLC.

The SPLC blames that on Florida's truth in sentencing law, which requires prisoners to serve 85% of their time.

Their report, "Long Road to Nowhere," says Florida's older inmates are responsible for half of chronic illnesses, and thus, are two to three times the cost of a regular inmate.

Skagenberg told this story about the time he had a hernia: "It definitely needs to be fixed. He said, 'But we can't do it right now because we have so many people here at Butler so we will have to send you back to your receiving camp, and we will send for you in about six months.'"

In terms of reforming the system, one state senator wants to create a board to determine which prisoners could be safely released.

Like in years past, it never got a vote on the full floor.

"We have to establish a broader vision of what we want our criminal justice system to look like," said State Sen. Jeff Brandes (R-St. Petersburg). "Largely what we have today is a system that warehouses people."

Brandes' bill required eligible inmates to serve 10 years, be over 65, not have been convicted of murder or molestation, and subject them to probation or house arrest.

The Southern Poverty Law Center wants to lower mandatory lengths of stay by increasing incentives for good behavior, which they say could save $860 million over five years by releasing 9,200 prisoners.

"The Florida prison system is in crisis," Brandes added.