TAMPA, Fla. - As head coach of the USF women's soccer team, Denise Schilte-Brown specializes in helping young women overcome obstacles. But when she recruits new players, she occasionally faces an obstacle you may not expect. She says prospective players have expressed concerns about playing for a female head coach.

And while USF pays her in line with her male counterparts, her prior employers paid men much more.

Her experience illustrates the problem many women face in seeking positions of leadership and equal pay.

"It’s such a fight to get a position in a male-dominated profession, that when they get there, even though they’re getting half the salary or substantially less, they feel that's step one, you’re pioneers in all these things,” she said.

“We have a cultural stigma around discussing our wages and many women may not even know they are being severely underpaid compared to their male counterparts,” said Florida State Representative Anna Eskamani, who says government should consider punishing companies that pay women less for the same jobs. “So if a company is paying one gender more than another, there can be an actual path through to penalize that company.”

Much of our government may also want to investigate its own hiring practices. FOX 13 examined payroll data in the state personnel system and requested median salaries by gender. It revealed gender pay gaps to varying degrees throughout much of the public sector. 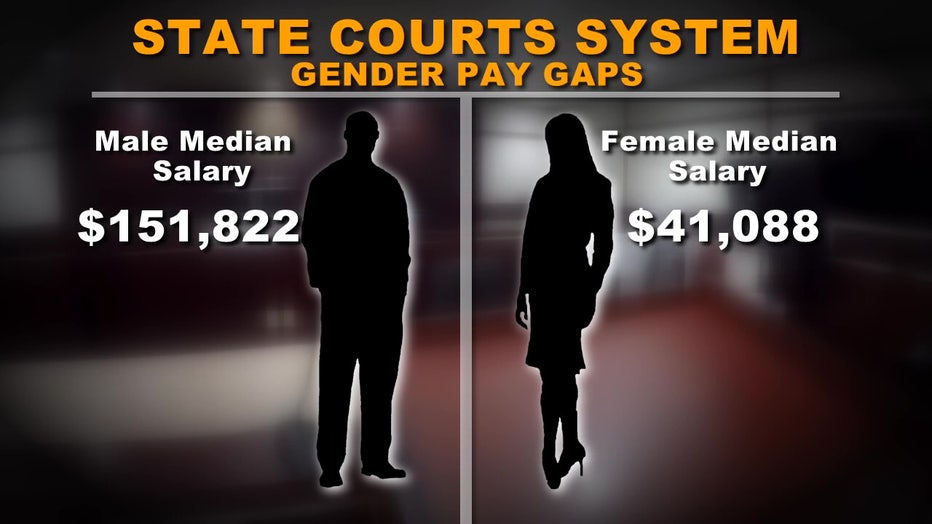 That pay gap in our court system appears to be largely driven by politicians and voters. The legislature approves pay rates for judges, and those approved rates place them at or near the top of the pay-scale.

Meanwhile, judges and many top officials in the court system are appointed by the governor or elected by voters.

The Florida Office of the State Courts Administrator provided the following statistics to put its pay structure in perspective:

According to the Florida Office of the State Courts Administrator, the ratio of state officials chosen by the electorate or the governor represents a uniquely large portion of the workforce among other branches and levels of the public sector and makes any analysis of pay for the entire state courts system problematic.

In reviewing salaries in the state’s top leadership positions, the median salary in the Office of Florida Attorney General is $43,899.96 for women and $58,768.97 for men.

A spokeswoman for Attorney General Ashley Moody noted the majority of the office’s work focuses on legal matters, and the gender pay gap narrows when you refine the comparison to staff attorneys. The median salary for male attorneys is $67,745 compared to $65,972 for female attorneys. The AG’s office also stated there are more female attorneys than male, which could affect the median numbers.

State Commissioner of Agriculture Nikki Fried closed the pay gap in her office’s payroll to within $587 -- 98 cents to the dollar.

The gap in other state departments varies, as do local governments. Tampa and St. Pete have narrowed the gap in their payrolls the past five years.

As St. Pete's deputy mayor, Dr. Kanika Tomalin manages 3,000 city workers. When we first requested the city's payroll data (sortable by gender), she said she had already issued a directive to audit every position and close any gaps.

She discovered no gender pay inequities that could not be explained by differences in experience or other factors. The city of St. Petersburg will conduct regular reviews going forward.

"We are going to take immediate action based on the results so we want to make sure they are credible,” said Dr. Tomalin. "A man and women will not do the same job and same experience and be paid differently for it.”